UkaTake is the slash ship between Keishin Ukai and Ittetsu Takeda from the Haikyu!! fandom.

Ittetsu Takeda teaches Japanese Literature at Karasuno High School and he becomes the volleyball clubs faculty advisor, even though he knows almost nothing about volleyball.

Keishin Ukai is the grandson of the former Karasuno High School volleyball coach. Keishin also went to Karasuno and played in the volleyball team as a setter. He played through college then after graduating he works at Sakanoshita Store which he inherited, but he still plays with a local team.

Ittetsu Takeda finds out that Keishin is the grandson of the former volleyball coach and pesters him with calls and visiting the store to try and get Keishin to take up the position of volleyball coach since the team doesn't have one. Keishin turns the job down multiple times, he said he did not want to coach and also because he did not want to set foot in the gymnasium as it holds fond memories from when he was young and he played there, yet he won't be able to play in there again.

Takeda casually brings up that he managed to get a practice match with Nekoma High School. Which changes Keishin's mind because when he was playing at Karasuno, was when the rivalry with Nekoma High School was at it's peak. And the new coach at Nekoma was a player from back then and Keishin knew him. Keishin grabs Takeda by his suit jacket and starts shaking him whilst shouting at him "You trying to seduce me?". Takeda keeps repeating "I'm sorry" over and over. While Keishin shouts that he isn't going to fall for such an obvious ploy but then follows up by asking when practice starts.

Originally Keishin said that he would only be Karasuno's coach until the game with Nekoma but that soon changed.

Since Ittetsu doesn't know alot about volleyball Keishin is often explaining things to him when they are both sitting on the sidelines during practice and matches.

Ittetsu and Keishin are seen as the the parents of the vollyball team, they both help and support the boys in different ways, Ittetsu being the soft enthusiastic one and Keishin being firm but fair. This encouraged fans to think of them in a relationship.

There are many different types of fanfics for this pairing but they include high school/college AU's, soulmates, friends to lovers and established relationships. 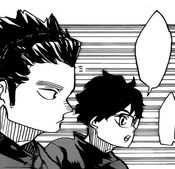