Uliro is the slash ship between Shiro and Ulaz from the Voltron: Legendary Defender fandom.

Flashback, disguised as a doctor, Ulaz and two Galra doctors are moments away from operating on Shiro. As one of the doctors attempts to give Shiro a heavy sedative, Ulaz slaps their hand away as he wants “him wake enough to feel this.” This is a ruse, as he wants Shiro to be able to escape. Ulaz proceeds to attack the others and free Shiro from his restraints. He moves to Shiro’s side, uploading the coordinates of the Blade of Marmora base into Shiro’s robotic arm. He informs Shiro he has to hurry as Zarkon has located the Blue Lion to be on his planet Earth. As Ulaz helps Shiro up from the bed, Shiro asks who he is. Ulaz tells him his name, but then swiftly pushes him forward, telling him to “come on.”

Out in the hallway, Ulaz tells Shiro how Zarkon will know he helped Shiro escape, which means he has to disappear. Shiro questions why he’s helping him, which Ulaz answers, “As a fighter and leader, you give hope. Hurry! Earth needs you. We all do.” With that, Ulaz runs off and Shiro makes his escape back to Earth.

Present day, while in a healing pod, Shiro remembers Ulaz helping him. With the help of Pidge, the coordinates are retrieved from his arm. Shiro and team head out for the location. Once arriving, the castleship is abroad by an unknown assailant. Following the team’s failed attempts to stop them, Shiro’s next. Shiro comes up behind them; ready to attack when they lower their weapon. They reveal themself to be Ulaz once recognizing Shiro. Allura plows her way past Shiro, slamming Ulaz up against the wall, demanding to know who he is. Shiro runs up to them, telling Allura, “Stop! It’s him! This is the Galra who set me free!” Ignoring Allura, Ulaz only looks to Shiro, saying, “You’ve come.”

Allura has Ulaz placed in restraints, to which Shiro comments, “I don’t think this is necessary.” With Ulaz knowing it’s Shiro who has come, he welcomes him and the others to the hidden Blade of Marmora base. To get to the base the castleship would have to be flown into a cluster of unstable xanthorium crystals. The team argues over this with Shiro telling them, “Ulaz freed me. Without him we wouldn’t be here.” Allura is the one to ultimately decide on what to do. Following Ulaz’s instructions, the team head for crystals, going through folded space-time.

Elsewhere, Zarkon manages to track the paladins and sends the now the robeast Prorok to them. Voltron has a hard time keeping the robeast at bay. Ulaz, having flown away once the fighting began, has returned. Ulaz’s voice comes through the radio and Shiro shouts, “Ulaz!” Ulaz tells the team he’s going to take the robeast down from the inside, to which Shiro tries to tell him to let Voltron handle it. Ulaz doesn't listen as he flies his ship into the rebeast, opening up a space pocket, killing the beast and himself with it. As the team realizes what Ulaz did, Shiro looks on with a hurt expression, whispering, “He’s gone…”

Back on the castleship, Shiro’s mourning the loss of Ulaz. He comments how he still “has so many questions.”

THE BELLY OF THE WEBLUM

Antok, a Blade of Marmora member, mentions how Ulaz was right to trust Team Voltron, to which Shiro says, “He sacrificed everything to bring us together. Let’s honor him by taking down Zarkon.”

“Stop! It’s him! This is the Galra who set me free!”
— Shiro to Allura about Ulaz, Shiro’s Escape.

“Ulaz freed me. Without him we wouldn’t be here.”
— Shiro, Shiro’s Escape.

“He sacrificed everything to bring us together. Let’s honor [Ulaz] by taking down Zarkon.”
— Shiro to Antok, The Belly of the Weblum.

Not exactly a rare pair, but a least favorable ship compared to others. Uliro has a small, though dedicated following. 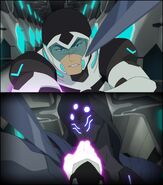 Shiro tells Allura, “Stop! It’s him! This is the Galra who set me free!”