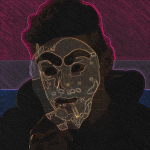 usually one of the worlds located in his head

Mainly ships slash and femslash, but has some hetero, poly and non-binary ships too.

To be honest, he's a huge pop-culture geek.

Loves writing and plans on publishing his stories as books. Can't imagine his life without music - he listens to it every day. Likes drawing, but he's not very good at it for now. Also does edits from time to time (@xrohanmorowx on Instagram) and is a beginning cosplayer.

Characters he relates to:

Retrieved from "https://shipping.fandom.com/wiki/User:AnEvildoer?oldid=216691"
Community content is available under CC-BY-SA unless otherwise noted.