Married; All are deceased (post-timeskip)

• Badass Family
• Happily Married
• Happily Ever After — After his injuries, Tengen retires to live with his wives.
• Perfectly Arranged Marriage

“Your lives are more important than fulfilling your duties. Saying that in this line of work is somewhat odd, but I don't care.”
— Tengen to Makio, Suma, and Hinatsuru

UzuiWives is the poly ship between Tengen Uzui, Makio, Suma, and Hinatsuru from the Demon Slayer fandom.

It is believed that the men in Uzui’s family are forced to marry three women carefully chosen by the elders as soon as they boys turn fifteen years old. It is not known whether the same fate awaited Tengen or if he chose the girls himself, but Tengen loves his wives and cares about their well-being more than anything in the world.

After Tengen left his clan and all four went to see Kagaya Ubuyashiki in order to fight as a part of the Demon Slayer Corps, he taught Makio, Suma, and Hinatsuru his life ideology — they come first, then other people, and only then Tengen himself. Makio questioned this in private, as it went against what the women had been taught as kunoichi (female ninjas). Tenggen himself admits that it's an odd thing to say in their line of work, but he insists that his wives are the most precious peole to him and they always must come back home to him no matter what happens. When Tengen hears rumors about a demon residing in the Entertainment District, his wives go there undercover to gather intel. They send him letter to let him know how their investigation goes. When all three go missing, Tengen decided to take action.

All three women are uncovered by a female demon who hold them captive. Tengen manages to find and save Hinatsuru in the Kirimise. He is worried about her, and as he hold her in his arms, Hinatsuru apologizes for failing the mission. Tengen assures her that she did well and embraces her before sending her to a safe place to get her wounds treated. After Inosuke finds other two of his wives, Tengen seens to be very happy to see them. He pats them on the head, reassuring them that they've lived up to his expectations as his wives.

After the final battle, Suma, Makio, and Hinatsuru immediately rush in to help to Tengen who was poisoned. He is heavily wonded and his wives display concern over his injuries as they cannot help him. They all weep for their husband, but when Nezuko manages to heal Tengen, the women rejoice at the fact that he's been healed, and cry from happiness as they embrace him.

UzuiWives is Uzui's third most written ship on AO3. Fans appreciate the strong bond that exist between Tengen and his wives. Uzui hold his wives dear to his heart — when Tengen remembers his cruel father and brother, he shows resent for their life philosophy and expresses his disagreement over other men letting their wives die in childbirth. Tengen mentions that he despises people who don't take wishes of other into account, meaning that he, himself, would never risk the lives of his wives like many men of his age and his position might do. 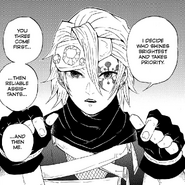 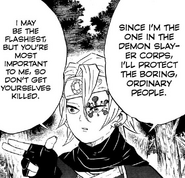 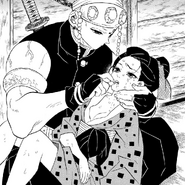 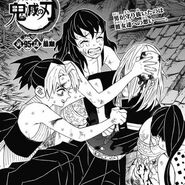