Valomar is the femslash ship between Jill Valentine and Sheva Alomar from the Resident Evil fandom.

Jill and Sheva don't have any interaction until chapter 5-3, though before then through out the course of the earlier chapters Sheva learns of Jill through Chris Redfield, being Chris' former partner. In chapter 2-3, Chris informs Sheva that he can't leave as he's got a “personal stake in this.” That “personal stake” being Jill. Recalling back to chapter 2-1, Sheva tells him, “That woman in the data file? Are you even sure it's the same person!?” Chris is sure, to which Sheva then agrees to abandon the mission at hand to help find Jill.

Later, Chris and Sheva confront Excella Gionne in the Monarch Room. Chris demands to know where Jill is, to which Excella mocks him and Sheva about Jill's whereabouts, moments later the same hooded figure they've been seeing around jumps down, landing between them and Excella. An intense fight breaks out with Chris managing to shoot off the figure's mask. The figure jumps back and lands at a safe distance away, with their hood still covering the top of their face. Albert Wesker, Chris and Jill's former captain and current nemesis, watches on for moments before showing himself. He mocks Chris about this being a “family reunion,” to which he pulls the hood back, revealing Jill's face. Chris calls out to Jill, and Sheva, having never met Jill before questions Chris if he's sure. Before Chris can answer her, Jill attacks again. Once Jill has Chris in a tight hold, Sheva holds a gun to her head, only for Wesker to elbow her out of the way. Jill manages to move back to Wesker, a two-on-two battle forming. Wesker tells them he only has seven minutes to spare them.

Not wanting to hurt Jill, Chris and Sheva keep from attacking her, keeping their main focus on Wesker and avoiding his attacks. With the seven minutes over, Wesker leaves them to “watch Jill suffer.” Chris and Sheva notice a P30, a chemical compound known for its performance-enhancing effects on the human body, on Jill's chest. They work together to get it off of her, awhile Jill fights to kill them. Chris and Sheva soon mange to free Jill of Wesker's control over her by pulling the P30 from her chest. Jill falls to ground, while Chris holds her in his arms. Jill looks over to Sheva standing next to them. She apologizes and asks Sheva for forgiveness, to which Sheva says it's alright.

One of the fandom's least preferred ships as femslash ships aren't has prevalent as it's het and slash ships. Valomar has a small following and is considered a rare pair. On AO3, it has 10 works in its tag. 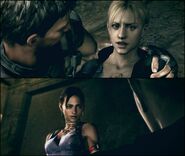