• I Want My Beloved to Be Happy - Despite being heartbroken by Vax's rejection, Gilmore is still happy to be his friend.
• Love Triangle - A more mild version with Keyleth.

Vax – “Can you take the afternoon off?”
Gilmore – “For you? Of course.”
— Shopping and Shipping

Vaxmore is the slash ship between Vax'ildan and Shaun Gilmore from the Critical Role fandom.

Vox Machina decide to make their way to Gilmore's so that they can stock up on supplies. As they enter the store, Keyleth tells Vax that he should be the point man for them, given Gilmore's fondness for him. The rest of the party and Vax agrees. Keyleth goes over to him and enhances his charisma, and sends him forward. He hits the bell on the desk and an employee rushes forward, but Gilmore steps out from the back room before she can get to them. He realizes that it was Vax who summoned him, and is happy to see he's returned. Vax how he's been as Gilmore hugs him and lifts him to the other side of the counter, saying that it's been to long. Vax wants to hear about everything that's been going with Gilmore. Gilmore tells Vax (and the rest of Vox Machina) about the expansion of his business. He asks more about them, noticing how tired they all look. Vax quickly explain their time in Kraghammer, and how they need their stores replenished. However, he think the others can handle it. He'd like to stroll through the city with Gilmore, and hear about everything that's happened. He asks if Gilmore can take the afternoon off, and Gilmore says that he'd do it for him. He leaves the shop to Sherri and the two stroll out the door.

Gilmore takes Vax along the promenade and tells him more of his expanding business. As they walk, Gilmore leads Vax to a botanical garden, and asks him about Vox Machina. Vax says that they're tired from their time in Kraghammer and wasn't joking when he said that they're lucky to be alive. Gilmore's says that's why he does what he does, Vax saying that he's never met anyone quite like him. Gilmore asks if he would share some wine, and pours some from Vax's home, since he hasn't been there in awhile. Vax says that's a subject that he's not ready to talk about, but maybe someday. They drink the wine and chat before heading back to the shop.

The two drunkenly stumble into the shop, Vax recounting his own battle with a duergar that amuses Gilmore. Gilmore then regains his composure and goes to haggle prices with the rest of Vox Machina. They all try to haggle for a lower price, and eventually come to an agreement. Vax and Gilmore flirt as Gilmore says that he's only doing this through their arrangement. Vax agrees, and says that he's not taking advantage. They wrap up their transaction and asks Vax where they're staying. Vax takes his hand and tells him that they live in the city now, and he's welcome in his home anytime. Gilmore says that's good to know, and Vox Machina leaves.

The Path to Whitestone

Liam – “Will you remind me because it’s been a while. Gilmore’s a good-looking man, though, isn’t he?”
Matt – “Yeah. He’s handsome.”
Liam – “Yeah.”
— Shopping and Shipping

Vax – “We’ve been out drinking for two hours, man.”
Gilmore – “This is true. I’m sorry.”
— Shopping and Shipping 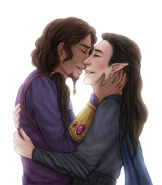 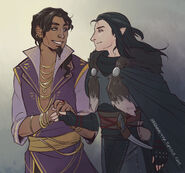 Vaxlethmore refers to the ship between Vax, Gilmore and Keyleth