Vectilla is the het ship between Vector and Vanilla from the Sonic the Hedgehog fandom.

Vector and Vanilla both originate from the games but never had a physical interaction with each other. In Sonic Free Riders, Vanilla saw Vector on TV.

In “Defective Detectives”, Vanilla hired the Chaotix Detective Agency, a group lead by Vector, to find her daughter, Cream. Vanilla later found Cream at the Thorndyke mansion, where Vector and Charmy Bee were trying to forcefully take her with them. Vanilla thanked Vector for finding her daughter.

During the attack of the Metarex roughly six months later (equivalent to six Earth years), Vanilla gave Cream permission to go to space with Sonic, his friends, Chris, and Cosmo. While they were in space, Vanilla asked Vector and the Chaotix to go check on Cream and Cheese and bring Chris his stuff, which he was eager to do.

In order to get more approval from Vanilla, Vector reinterpreted her words as a request for her to rescue Cream from the dangerous mission, popping her and Cosmo into a sack to bring them home. However, the misunderstanding was cleared up and it was decided that Cream was safe and in responsible hands.

In the original Japanese version of “So Long Sonic”, Vanilla went to visit the Chaotix, giving them home-made cake and other pastries to thank them for their help. Afterwards, Vanilla and Vector went for a walk; The latter had a crush on Vanilla, while the rabbit may have returned the feelings.

During the aftermath of the Metal Virus crisis, the Chaotix has been swamped with an exceedingly large amount of missing persons cases, with Vector particually lamenting the days when they did not have so many cases. While this is going on, Vanilla arrives, along with her family, to provide them with treats as a thanks for their part in handling the crisis. Vanilla, in particular, commends them for their selflessness, which Vector thanks Vanilla for with a blush. After getting an idea of the Chaotix’s workload, Vanilla decides to help the Chaotix, by having the Chao organize files and Gemerl create a database of cases while she and Cream work the phones. After Vector realizies what this means, he the rest of the Chaotix rush out, with Vanilla waving them goodbye.

Vectilla is the most popular ship for both characters. It is mainly popular among fans of Sonic X due to their semi-canon romance in the show.

On AO3, it is the most written ship for both characters. For Vanilla, it is by far the most written, as it is currently the only ship for her that has more than 3 fan-works. For Vector, it is closely followed by Vecpio.

Vectnilla may not be the most popular ship, but most fans really ship it if they do. 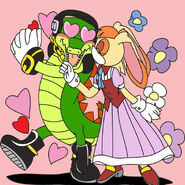 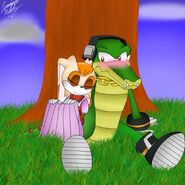 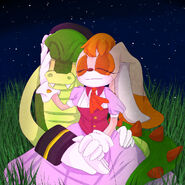 Tails The Match Maker - Vector and Vanilla VS DeviantArt