Venbara is the het ship between Venti and Barbara Pegg from the Genshin Impact fandom.

Venti and Barbara lacks a bit of interactions, however, they still at least some interactions and voicelines of each other.

Venti calls Barbara "the darling Deaconess" and compliments her voice, saying she has a sweet singing voice. Venti asks the Traveler if they know her, asking about the meet and greets, her concerts. The Traveler, probably replies Venti at some point however their answer just wasn't recorded in his voiceline.

Barbara mentions that Venti's voice is amazing, however, she thinks the songs he sings and the ones that she's good at are very different. Barbara states that she tried to learn them, but the melodies were just too complicated for her.

In Act 1, at Windrise, the Traveler's plan to try and go to the Golden Apple Archipelago was by asking Venti. Traveler asks Venti if he knows the archipelago, he congratulates the Traveler as he had found the right person, meaning that yes, he knows the archipelago. Venti talks about the archipelago for the mean time, until he started playing his lyre. The wind was picking up as he was playing it, and then, Dvalin suddenly came, which made Barbara shocked. After arriving at the Archipelago, Barbara asks Jean who was that bard (Venti). Jean obviously knew that he was Barbatos so instead of telling her that he was Barbatos, she told that he was a legendary bard. Barbara becomes amazed, saying he's an impressive person, and states that they should thank him properly. Still not knowing the fact that he's Barbatos.

“The darling Deaconess with the sweet singing voice — do you know her? You do? Idol, huh? Meet and greets? Concerts? Wow... That's the power of music for you...”
— Venti's voiceline about Barbara

“Venti's voice is amazing! But the songs he sings and the ones I'm good at are very different. I tried to learn them but... the melodies are just so complicated.”
— Barbara's voiceline about Venti

Venbara isn't a popular ship in the Genshin Impact fandom, mostly, the fandom portraits the pairing, Venti as the drunken bard while Barbara is willing to help Venti recover from being drunk. Venbara is often overshadowed by XiaoVen, ZhongVen, Barbennett, and Barbelle which are some of the two's popular ships. On Archive of Our Own, there are currently about 26 fanfictions depicting the two. 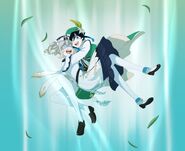