Never met (do not exist within same universe); Kokichi is dead

Venkichi is the slash ship between Venti and Kokichi Ouma from the Genshin Impact and Danganronpa fandoms.

Since they are from different series, neither of them have interacted, and it is unlikely they ever will. Regardless, they are both shipped together often by Genshin Impact and Danganronpa fans, being one of the more popular out of series crossover ships. This is likely due to how similar they are, in canon and fanon. They share many traits, from physiology to personality. However, the popularity may also be a result of the popularity of both characters in their respective fandoms.

Personality-wise, Venti and Kokichi are very similar and share many traits. For one, both characters are known to be the most playful in their respective games. They are both very carefree as well. Also, they are both very recalcitrant, causing many problems for their sides due to their troublesome personalities. Even though they have many personality-wise similarities, they also have many differences. For one, Venti is honest about his mistakes and is at least open about his desire to fight for the good side. Meanwhile, Kokichi is very manipulative, and he purposely causes problems, leading many to believe he is inherently evil. However, he hides that in the end, he is morally grey, as he performs evil actions in an endeavor to end the killing game.

Regarding both characters physiologies, they are also very similar. For one, they are both very short. Kokichi is 5'1"/156 cm, while Venti is 5'3"/161 cm tall. They both appear like the opposite gender or at least somewhat androgynous, seeing as how many new fans of their series mistake them for being female. Also, both of their designs appear to be capes. And both characters are born in the same month, June.

This cross-over ship mostly got famous on social media is because of their similarities and one of the popular characters in their fandoms. When Venti was first introduced in Genshin Impact, the fans on the other fandom started to compare him with Kokichi. Some fanarts will even show them together interpreting each other’s personality or wearing each other’s clothes. Some fans will even make jokes that Kokichi’s past life was Venti before Danganronpa was created, especially on Twitter. Most fans would even prefer this ship as platonically and just see them as friends.

Both characters are shipped with their games' protagonists, and the ships, Venther, VenLumi, Saiouma and Oumatsu, are also popular in their respective fandoms. Though this cross-over ship is often overshadowed by their other popular ships like Oumeno and XiaoVen. 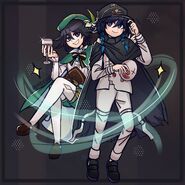