View source
watch 01:25
Jurassic World: Dominion Dominates Fandom Wikis - The Loop
Do you like this video?
Play Sound
This article is about Venti and Aether. You may be looking for the ship between Venti and Lumine.

Venther is the slash ship between Venti and Aether from the Genshin Impact fandom.

Aether first encounters Venti when he spots a flying dragon with Paimon, and with Aether gaining the power of Anemo not too long ago, it suddenly scared the dragon away. Venti then asks who was there before disappearing.

After fighting off the same dragon who happened to be the same one Aether and Paimon scared away they see Venti, the dragon's name is Stormterror. Aether and Paimon follow Venti as he left a track of footprints that can be seen with elemental sight. As they approach Venti, he is seen putting on a performance. After Venti's performance, Venti immediately recognizes Aether and Paimon as the one who scared away Dvalin. Paimon questions who was Dvalin before Aether reminds her that it was Stormterror's real name mentioned by Lisa. Venti introduces himself to Aether and then asks if there were anything he needed. Aether shows Venti the teardrop crystal, which happens to be purified. Venti mentions of the anguish Dvalin has been suffering has brought him to tears. Venti mentions that he as well came across of the same teardrop crystal and asks Aether if he can purify it. Aether holds the crystal which purifies under his touch.

After the purification, Venti tells Aether that he has wonder abilities. As well someone like Aether will most likely end up in some bard's poem. Venti then rhythms a poem to Aether, and then tells Aether that he doesn't have the time to write a poem for Aether. Venti continues to talk about Dvalin and Aether has a list of options to tell Venti. If the player who chooses that if there is anything that Aether can do to help Venti, Venti will for gracious for the purification of the crystal but declines any help as he mentions he already has a plan of his own. Venti then leaves, Aether tells Paimon that for some reason his voice is somewhat familiar to him.

Aether and Paimon go after Venti who was located in Windrise. Venti notices the two and asks why they were here but also happened to be on the thought if Aether would've followed him. Aether asks about the Anemo God and Venti tells Aether that the god already disappeared a long time ago. Venti rambles about the Gods of Liyue and Inazuma but asks Aether why he wanted to know about the Anemo God, and if it had something to do with Dvalin. Aether tells Venti that it has something to do with Dvalin's past until an Eye of the Storm appears. After defeating the Eye of the Storm, Venti notices that not only Dvalin was the only one that has changed in the world. Venti brings up about what Aether was telling him, after Aether and Venti then discuss of the things Lisa has said to Aether about Dvalin. They discuss about the pain Dvalin has been going through and it how the Abyss Mage have been torturing him to become like he was. Venti tells Aether when he interrupted, he was poisoned while trying to communicate with Dvalin. Which is why Venti went to Windrise to heal. Aether asks Venti if he was the one who did it and Venti tells him yes he was. In order to make up the accidental interruption Aether will need to accompany Venti to the Cathedral to get the Holy Lyre der Himmel.

Venther is a pretty popular ship for the two. This ship currently rivals their ships with Xiao, XiaoVen and Xiaother, which happen to be the most popular ships for the two. Unlike his sister, Lumine, Venther is much more popular than VenLumi. On AO3, there are currently 480+ romantic works and 203+ gen works. This outnumbers the amount of both romantic and gen works VenLumi has. 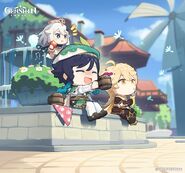