Vexahra is the femslash ship between Vex'ahlia and Zahra Hydris from the Critical Role fandom.

The Trial of the Take

Half of Vox Machina is waiting for their assignment from the slayers take when a tiefling woman walks in and is told that she is a part of her group. Vex asks what her name is, and the woman introduces herself as Zahra. Vex asks if she wants to know her name, Zahra initially put off by Vex's cold demeanor but humors her. Vex introduces herself, and the two shake hands, Percy commenting on the icy-ness of it all. They eventually start to argue over who will take the scroll for the hunt, and do a quick round of roshambo to settle things. Vaness then hands the scroll to Zahra, much to Vex's annoyance since she won. She tells Zahra to give it to her, but Zahra says that it was given to her. Vex then takes it and places it on her shoulder, Zahra sarcastically saying that she hopes she doesn't lose it.

After a long day of travel the group sets down for a rest, Vex and Zahra taking first watch together. Vex casually asks where Zahra is from, and she tells her that she's from Feren. Vex asks why she left, and Zahra explains that after her father was killed she was left alone so she left. Vex says that she's familiar with something like that, since her mother was killed by a dragon. Zahra asks about her father, but Vex just says that he was an asshole. Zahra says that hers was as well, a dark wizard who kept her in a cage. Vex says that hers was just a dick, and says that they're getting a bit personal. Zahra says that she thought they were bonding causing Vex to laugh. They share food and talk through the rest of their watch.

The Trial of the Take

The Trial of the Take, Part 2

Vex – “Getting a bit personal here around the fire.”
Zahra – “Sorry. I thought we were bonding.”
— The Trial of the Take, Part 2

A smaller ship in the Critical Role fandom, it tends to get overtaken by Main Player Character ships. It still has a fairly strong fanbase. 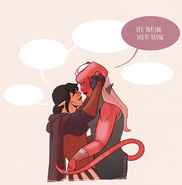 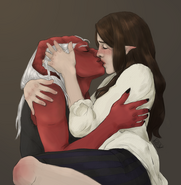