Walgi is the slash ship between Waluigi and Luigi from the Super Mario fandom.

Waluigi and Luigi's first shown interaction comes from Mario Tennis. During the intro, when Waluigi introduces himself, Luigi states he "is not afraid" of the man, which causes Waluigi to angrily march towards Luigi. Both ends are shown to taunt and mock each other, such as when Luigi ignores Waluigi during the latter's ending or them constantly scowling at each other. Within the Japanese Mario Tennis website[1], it states that Waluigi envies Luigi for his fame and wishes to prove himself as superior. With this in mind, its likely the duo have met before.

Mario Power Tennis goes further with Waluigi's jealousy of the younger Mario bro. In the opening cutscene, he and Wario graffiti pictures of the Mario Bros, as well as team up with Bowser in order to cheat a win with them. Despite this, Mario and Luigi end up defeating the trio. Mario Party 3 also depicts renders of Waluigi and Luigi, once again, displaying anger. Their team names from the Mario Party sub series are as follows: "Unlikely Bros." in Mario Party 6 , "Lean 'n' Mean" in Mario Party 8, and "Lean Meanies" in Mario Party DS.

In the story mode for Mario Tennis Aces, a possessed Wario and Waluigi attempt to give Mario the legendary racket, Lucien. However, Luigi instead takes the object out of curiosity. This causes him to also be possessed. Although the trio is being controlled, this is one of the few instances in which Waluigi and Luigi work together. Mario Party DS also has them cooperate in order to grow back into their original sizes, thanks to Bowser shrinking them.

“Mario and Luigi are always yapping about how amazing this place is… Meh! I’m not impressed.”
— Waluigi, Fortune Street

Waluigi – “Hope you're comfortable in last place, (Player's name), 'cause that's where you belong!”
Luigi – “Knock it off, Waluigi! I'm pretty sure you're the one who belongs in last place!”
— Fortune Street

Despite the heavy rivalry between the two in canon, fanon may sometimes stray from that aspect. Rather, their relationship is typically portrayed with a mutual understanding of not achieving recognition or merely being a sidekick. This is not to say Waluigi and Luigi's rivalry is ignored, though. Fanart of them playing tennis together is more likely to depict their rivalry, and Waluigi will still be portrayed as being jealous of Luigi. If a romantic twist is put into it, it is likely to only have the pair be dating rather than marry each other.

The ship has become popular enough to where Japanese fans have made fan games of the pairing. One notable example is "LuiWalu Time," in which the player is Luigi trying to impress Waluigi. The game became more well known in the West thanks to Twitch streamer Vinesauce for playing a Google Translated version of the game. 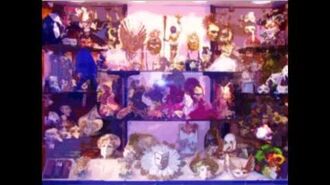 Retrieved from "https://shipping.fandom.com/wiki/Walgi?oldid=134097"
Community content is available under CC-BY-SA unless otherwise noted.