Shipping Wiki
Register
Don't have an account?
Sign In
Advertisement
in: Ships, Ships/Femslash, Once Upon A Time/Ships,
and 9 more

Once Upon A Time
Mulan
Beauty and the Beast

Warrior Beauty is the femslash ship between Mulan and Belle from the Once Upon A Time, Mulan and Beauty and the Beast fandoms.

Belle finds the home of the Yaoguai and tries to sneak up on it when she suddenly alerts it to her presence. The creature bursts from the cave and starts to chase her. As she runs, she trips and is about to be attacked when a masked figure shoots the creature with an arrow. The Yaoguai runs off and the figure removes her mask as she walks to help up Belle, revealing herself as Mulan. Belle asks how she can thank Mulan for saving her, but Mulan is more mad that Belle ruined her hunt. It took her weeks to find it, and Belle tells her that she found it in a day. Mulan thinks that Belle just had luck, but Belle had done research to find it and offers to help Mulan find it again. Mulan says to stay out of her way and goes off to find the Yaoguai on her own.

Belle is being harrassed by some of the men who were also on the hunt for the Yaoguai, when Mulan shows up and pulls one off her. She tells them to let her go and fights the two as Belle watches. She gets them to leave as Belle walks over and says that she didn't expect to see her again, also thanking her. Mulan says that she put up with men like that in the army, and she wanted to stand up for her unlike the soldiers did for her. Belle notices the cut on Mulan's leg, but Mulan insists that she's fine. Mulan says that they need to get moving before the sun sets, confusing Belle. Mulan says that Belle tracked the beast faster than her, and wants her help so that she can kill it. Belle says that it would be an honor to help her.

That night, they are able to track the Yaoguai down, Belle's knowledge still surprising Mulan. Mulan's leg starts to get worse, but Mulan insists that she has to protect her village. She stumbles forward as Belle catches her and tells her that she can't kill the Yaoguai if she can't even walk. Mulan realizes that she can't and tells Belle that she will kill it. Belle says that she's not a soldier, but Mulan insists that she can. People thought that she was incapable of doing what she did before, but she proved them wrong. She found something worth fighting for and never gave up on it. Her village is in Belle's hands now. She take off her sword and gives it to Belle, telling her not to be afraid.

After turning the Yaoguai back into Prince Philip, she takes him to Mulan. Mulan is happy to see her alive, and Belle says that she was able to defeat the Yaoguai, and introduces Mulan to Philip. She explains that Philip was cursed into the Yaoguai, and will now help Mulan. Mulan is surprised that Belle isn't coming with, but she has another beast to face. They trade back the book and sword, and say good bye.

“Let her go.”
— Mulan to the men hurting Belle

Because of their encounter in Once Upon A Time and are two Disney owned and based characters that are Disney Princesses, who have been femslash in Disney crossover ships that focuses on its princesses, there are fans who use the ship and some of its titles in both fandoms. 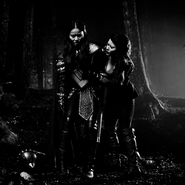 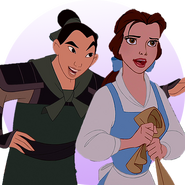 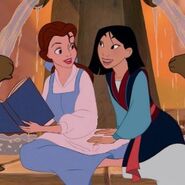