Shipping Wiki
Register
Don't have an account?
Sign In
Advertisement
in: Ships, Ships/Het, The Flash/Ships,
and 5 more

Westhawne is the het ship between Iris and Eddie from the The Flash fandom.

On the night of the particle accelerator explosion, Eddie stops a thief who stole Iris’ laptop. Iris is initially not impressed with him, taking her father's cue in referring to Eddie as “Detective Pretty Boy”, the cop who keeps score of his arrests, but she admits to Barry that she does think he is pretty. While Barry's in a coma, Eddie takes Joe's shift while they watch over Barry at the hospital. To thank Eddie, Iris buys him a cup of coffee. From there, their relationship starts blossoming and they secretly start dating. They keep their relationship hidden from Iris's father, as Iris thinks Joe won't handle it well if he finds out she's dating his partner.[1]

One afternoon, Eddie comes by the West house to see Iris, but is surprised that Joe is there and has to make up an excuse for why he showed up, leading to him and Joe going to work a crime scene. Iris apologises to him and Eddie presses for when they can tell Joe the truth, but Iris holds back and Eddie tells her that it feels more like she's the one stopping any progress. Later on, Iris shows up at the precinct to talk to Eddie. She opens up and tells him that she hasn't had a serious relationship before and telling her father would make it real for her, which made her scared because she might lose them. Eddie tells her that's what he wanted and turns to leave, but Iris stops him and kisses him.[2]

Eddie is eager to get to know Barry, admitting he was a little jealous of him because of how close he and Iris are. Eddie and Iris keep their relationship a secret from Joe because he is her father’s partner. Joe finds out and is less than pleased. Eddie has several awkward encounters with Joe regarding his relationship with Iris. However, when it is made clear by both of them that they are committed to making it work. Joe accepts their relationship. Iris has a keen interest in “The Streak” which makes Eddie jealous. When on a rooftop with “The Streak” Iris ignores Eddie’s call which feeds into the idea that Iris has a crush on the city’s new hero. When Iris realizes that Eddie is sending a strike team against newly dubbed Flash. She warns him and it is clear there are romantic feelings between them. However, once The Flash attacks Eddie in a meta induced rage, Iris cuts off contact with him. Focusing on her relationship with Eddie.

Eddie asks Iris to move in with him after an awkward encounter between himself, Iris and Barry. He notes that Barry has feelings for Iris but she brushes it off. Iris agrees to move in with Eddie and they begin living together.

Slowly Eddie begins to notice something has changed between Iris and Barry, unaware that Barry has admitted his feelings to Iris. During a discussion, Iris tells Eddie that Barry will always be part of her life. The situations continues to boil. During a bowling double date, Eddie notes the closeness between Iris and Barry. It bothers him and he confronts her. She informs him Barry will always be in her life. By a twist of fate, Barry is forced to go back in time undoing the day the Eddie was highly aware of Barry and Iris’ feelings, and the day they kissed.

Once the day is reversed, Iris is back to keeping her feelings bottled up. She informs Eddie of Barry’s admission of feelings. Eddie punches Barry and tells him to stay away from Iris.

Barry reveals to Eddie that he is the Flash, but he and Joe insist they must keep it from Iris. Aware that Eddie is keeping a secret, Iris and Eddie begin to have problems – causing them to no longer be intimate which Eddie accidentally admits to Joe. Seemingly on a break from each other, Eddie gets caught up in Flash business, being falsely arrested. Iris rushes to his side and forgets the prior issues between them.

Once back together, Eddie plans on proposing but his plans are thwarted by Reverse Flash who kidnaps him. During this time, he informs Eddie that Iris and Barry get married in the future. That his relationship with Iris is doomed and his life will not amount to much. Deflated, once rescued Eddie breaks up with Iris, acknowledging he was always aware of her feelings for Barry but had hoped he would be enough to make them fade. However, after having a conversation with Martin Stein, Eddie changes his mind, both Iris and Eddie agree to “screw destiny” and see if they can make their relationship work. This plan is cut short when Eddie shoots himself in order to stop Reverse Flash and save the city. He dies in Iris’ arms saying all he ever wanted to be was her hero.

I believe that we choose our own destiny! I decide who I love and I love you
—Iris

Despite Eddie's obvious positioning as the 'obstacle' love interest for Iris in the narrative, a large part of Flash viewers noted their good chemistry and relationship. Some fans also noted that their chemistry was better than Iris and Barry's, which, while likely unintended by the writers, made the choice to kill Eddie off and end that relationship for Iris feel like a lasting misstep. Fans have speculated that Eddie could return as Cobalt Blue at some point in the series. 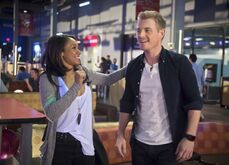 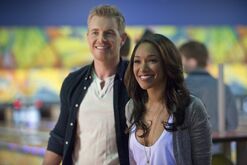 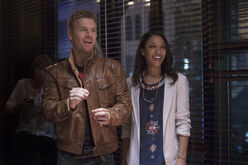 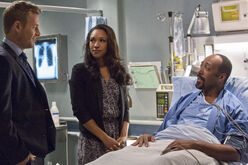 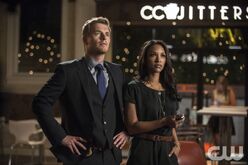