Whispangle is the femslash ship between Whisper and Tangle from the Sonic the Hedgehog fandom.

After the battle ended and everyone got ready to leave the island, Whisper found friendship with Tangle. When Sonic came to ask Whisper if she had made any friends, Tangle tried to confirm this by getting Whisper to tell a joke about a toaster she had told Whisper earlier. However, Whisper instead hid behind her mask, which made Tangle wonder if she had done something wrong.

Some time later, Whisper came to visit Tangle's home, which pleased the ring-tailed lemur. Tangle gave Whisper a tour of the village. At the end of the tour, Tangle brought Whisper to the Mineral Museum, where she introduced the wolf to her best friend, Jewel the Beetle. However, the sky soon turned dark, and the Babylon Rogues broke in the museum and stole everything. After Jewel got kidnapped by Storm, Tangle and Whisper went after the Rogues. They managed to get into their headquarters, and managed to get Jewel out. After returning to the museum and restoring its exhibits, Tangle and Whisper fist bumped and Tangle thanked Whisper for her help.

Later, Whisper encountered a familiar enemy, a shapeshifter called Mimic, who had taken the form of Sonic. After a fight, Whisper tracked Mimic down to Spiral Hill Village, where she suspected he was targeting Tangle. Whisper went to a rooftop and prepared to shoot Mimic, but was tackled by Tangle. The two fought, as Tangle believed Whisper to be under Dr. Eggman's mind control. Tangle took off Whisper's mask, which she believed was the cause of it. Whisper explained that the one she was trying to shoot was in fact not Sonic, but Mimic. Whisper then put her mask back on, and used it to show an earlier conversation between her and Mimic. Not wanting to reveal anything about Mimic in public, Whisper went to the Mineral Museum with Tangle, where she told Tangle and Jewel about Mimic. Jewel saw this as an opportunity for Tangle to go on another adventure. Whisper initially refused Tangle's help, but was convinced by her Wisps to let the lemur join her.

Tangle and Whisper went to an abandoned Eggman Empire bunker, and tried to scan it but failed. They soon came to the conclusion that they had walked into a trap. The two then went to look for Mimic, both wanting to fight him. Whisper also told Tangle about her history with Mimic. During their search, Tangle wanted to quicken the pace and search for Mimic at a higher point, which annoyed Whisper. Soon, Tangle heard Jewel's voice and left, while Whisper continued searching. When Tangle and Whisper met up again, Whisper asked for proof that it was the real Tangle. Tangle showed a cut on her shirt, and claimed it was caused by Mimic who had shifted into Jewel. However, it turned out Tangle was actually Mimic, whose shape-shifting abilities included copying clothes and making them look damaged. Whisper demanded to know where the real Tangle was, and after some fighting, she learned Tangle was locked in a safe.

After locating the safe where Tangle was kept, Whisper used her Wispon to open it. Whisper told Tangle that the place was about to be bombed, and Tangle pushed Whisper into the safe and closed the door. The safe remained completely undamaged during the explosion, allowing Tangle and Whisper to survive. After exiting the safe, Whisper told Tangle to go home, saying that she would not lose another friend. Tangle asked Whisper to tell her about her past, which she agreed to do.

Whisper told Tangle about the Diamond Cutters, a group of which Whisper used to be a member until Mimic killed all members except her. Whisper let Tangle see the Diamond Cutters in action by giving the lemur her mask, which allowed Tangle to see video clips of the team's missions. Tangle soon discovered that Whisper's mask also allowed her to be able to understand Wisps. Whisper told Tangle about how the Diamond Cutters' genius, Smithy, had built a Wispon prototype and that everyone on the team was meant to get one, but soon stopped. Tangle asked Whisper what happened, but she refused to answer. Tangle then asked to see the footage on Whisper's mask, and told Whisper she understood if the wolf could not confront her past at the moment but that letting Tangle know about Whisper's past would make it easier for Tangle to help her. Whisper agreed with encouragement from the Wisps, entered the details and let Tangle see the Diamond Cutters' final mission.

Tangle was horrified by the footage, and handed the mask back to Whisper. Tangle now understood parts of Whisper's personality and experiences better. She asked Whisper why the wolf didn't ask for anyone's help if she didn't want to work with Tangle. Whisper admitted to Tangle that she was the first real friend she had allowed to stay in her company since the incident, and that she did not want to lose another friend. Tangle also declared her friendship with Whisper, and said friends would look after each other, no matter what. Whisper reminded Tangle that Mimic nearly defeated the two, but this only made Tangle state that they would give double the payback. Tangle refused to back down and told Whisper she needed more positive energy and that Whisper's friends needed avenging. Whisper then hugged Tangle and thanked her. The two discussed their plan to defeat Mimic, Whisper thinking it would take a while to find him, while Tangle thinking Mimic would come back for the two due to Eggman demanding solid proof of their deaths.

Tangle and Whisper became members of the Restoration, a group dedicated to restoring various places after the Eggman War. During one mission, the two and Tails went to Central City, where he tried to research a cure for the Metal Virus. Whisper and Tangle took care of evacuating the city, as well as fighting Zombots. During the battle, they tried contacting Amy Rose at Restoration HQ for backup, but she did not answer. Other attempts at getting backup failed as well. Some time later, the two helped survivors on board the Rescue Shuttle.

The ship has gained support due to both being new characters in the IDW comics, their interactions together and their miniseries, rivaling the related Whisper ship Silvisper. Fan art of the two has been made. On AO3, despite having not much work, it is the most written ship for Whisper and the second most written ship for Tangle.

A Whispangle Week was held on Twitter on January 25-31, 2020. Fanart related to this was also posted on DeviantArt. 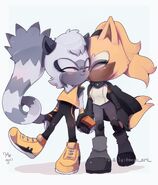 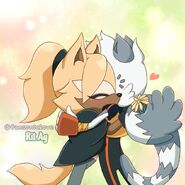 by Rit Ag and fansoniclove 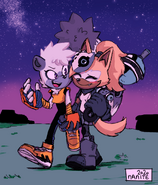 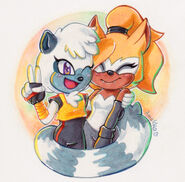 by Amalika
Add a photo to this gallery 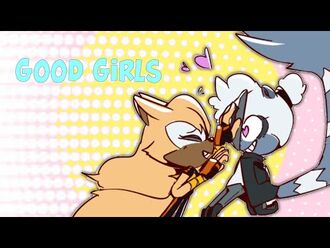 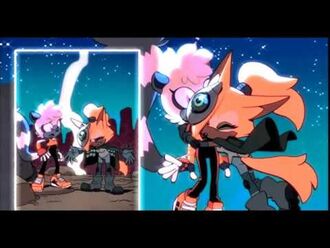 Retrieved from "https://shipping.fandom.com/wiki/Whispangle?oldid=298742"
Community content is available under CC-BY-SA unless otherwise noted.