White Knight is the het ship between Jaune Arc and Weiss Schnee from the RWBY fandom.

In Chapter 3 "The Shining Beacon, Part 2", while sarcastically humoring Ruby's idea to hang out, Weiss (jokingly) points to Jaune while talking about cute boys and calls him "Tall, blonde, and scraggly", which causes Jaune to turn his head. After Ozpin gives his introduction speech to the auditorium, Jaune comes over to Weiss and brags that he's a natural blond, which cause Weiss to do a face palm.

In Chapter 4 "The First Step", Jaune comes in between Weiss and Pyrrha and introduces himself in a suave manner, which simultaneously breaks Weiss's train of thought. Weiss's tone indicates she is disappointed to have to talk to him again, but Jaune doesn't notice and brings up what she said about him the day before. He then asks if she would like to join his team, but then Pyrrha explains that the team will be four people each and Jaune becomes dejected when Weiss rebuffs him when he says Pyrrha can be on his team too. After a complement from Pyrrha however, Jaune perks up and resumes hitting on Weiss until Weiss has Pyrrha send Jaune fly with her spear. When Jaune asks Ruby and Yang what when wrong, Yang points out that calling Weiss "Snow Angel" probably didn't help.

In Chapter 5 "The First Step, Part 2", Ruby and Weiss come into eye contact (which means their suppose to be partners) and Weiss tries to leave her, but when she sees Jaune, she turns right around and goes back to Ruby.

In Chapter 8 "Players and Pieces", as Weiss is falling from a Nevermore (long story), Jaune (who had be thrown into a tree) jumps out and catches her. Unfortunately, they are both still in midair and fall anyway with Weiss landing on top of Jaune and sarcastically saying "My hero".

In Chapter 14 "Forever Fall Part 2", Weiss goes with Pyrrha to help Jaune when he's being attacked by an Ursa and she agrees to keep Pyrrha's involvement in Jaune defeating the Ursa a secret.

In Chapter 2 "Welcome to Beacon", when Jaune ask to be included in team RWBY's board game, Weiss says she doesn't think he can handle it (which Yang responds to by pointing out how badly Weiss has been doing). Jaune calls Weiss "Ice Queen" and continues to beg to play Weiss's hand, but when Weiss says shes not trusting him with her pieces he points out she trusted him enough to tell him (and the rest of team JNPR) that Blake is a Faunus (however Pyrrha shuts him up before he can finish). When Neptune begins to flirt with Weiss, Jaune gets irritated when Neptune call her "Snow Angel" and gets flustered instead of angry.

In Chapter 3 "A Minor Hiccup", offers to take Weiss to get something to eat, to take her to a movie, and to study together, all of which she rejects.

In Chapter 5 "Extracurricular", Jaune asks Weiss to go to the dance with him while playing the guitar. Again, Weiss rejects him and explains to Ruby and Yang that she plans on asking out someone else. Later, when Jaune is sparring with Pyrrha, he talks about how he feels down since Weiss rejected him again.

In Chapter 6 "Burning the Candle", asks Ren about for advice about asking Weiss out saying "She's smart, and graceful, and talented, I mean have you heard her sing!". Pyrrha then advises him to dispense with the pick up lines and just be honest with her. Jaune then goes to ask her again, bringing a rose this time, but quietly leaves when he sees her ask Neptune to the dance.

In Chapter 7 "Dance Dance Infiltration", at the dance Ruby and Jaune meet up and Ruby says she's sorry that things didn't work out with Weiss. Jaune says he's fine with her coming with Neptune, but when Ruby says she came alone, Jaune steps away to have a word with Neptune. After talking with Pyrrha about how she didn't get asked to the dance, Jaune speaks with Neptune and demands an explanation to why he rejected Weiss. After Neptune explains that he didn't want to explain to Weiss that he can't dance, Neptune offers to step aside so Jaune can be with Weiss. Jaune instead tells Neptune to goes talk to her and just be himself, guarantying it will make Weiss's night. When Weiss asks Neptune what made him come talk to her, he tells her that it was Jaune and Weiss smiles while looking at Jaune.

In Chapter 7 "Rest and Resolutions", Weiss and Yang are finally reunited with team RNJR and they begin to talk about whats happened since they last saw each other while eating and Jaune and Weiss sit next too each other. When Yang brings up Jaune's old nickname "Vomit Boy", Weiss starts laughing.

In Chapter 11 "The More the Merrier", when Vernal breaks Weiss aura, Jaune pause for a second while he's fighting Cinder. When Jaune says that he doesn't care if he dies, Cinder decides to impale Weiss instead while Jaune screams out no.

In Chapter 12 "Vault of the Spring Maiden", Jaune immediately rushes to Weiss and holds her wound. While Jaune is crying for Weiss to be okay, his semblance activities and he is able to heal her.

After team JNR find out about Ozpin, Weiss tries to stop Jaune when he starts shouting at Oscar

In “Seeing Red”, when Weiss collapses after using her glyphs to slow Ruby’s fall, Jaune rushes to Weiss’ side

During “A Night Off”, Jaune asks if anyone wants to go to the movies with him and Oscar, and Weiss accepts straight away without a second thought. Mirroring the scene in Volume 2 where Weiss rejects Jaunes offer. This greatly shocks Jaune, but he accepts it nontheless.

After Jaune and his team were reunited with Team RWBY at the Schnee Manor, the virus Watts put inside Penny began to control her. Ruby shouted at Jaune to use his Aura Amp on Penny and it subdued the virus. As their friends ran up to them and Penny, Weiss knelt next to Jaune and put her hand on his shoulder and smiled at him with a look of joy and admiration. Jaune then looked at Weiss as she wiped a tear from her eye after Penny, Nora and Ruby hugged.

In the season finale, "The Final Word", the rest of Team RWBY has fallen into the Void leaving only Weiss as the surviving member. Jaune was the only remaining member of JNR left in the Void. Only Jaune and Weiss were left of both teams standing together alongside Penny to battle Cinder, who are the only ones left in the Void. Before Cinder could finish off Weiss, Jaunes scream of sorrow stopped her and brought her attention to him.

While Winter battles Cinder in a magical duel, Jaune helps Weiss walk to the exit to the Void. As they are walking, Cinder shoots a fire ball at the both of them. Jaune protects Weiss by using his shield disk to block the attack. Though the attack is blocked, Cinder creates a small explosion that causes Weiss to fall into the Void. As the Pathway is disappearing, Jaune makes a last ditch effort to exit the Void, but the portal disappears and he falls into the Void as well.

White Knight has had an interesting in the RWBY fandom over the years. While it sailed as far back as Volume 1 when Jaune tried to catch Weiss, it was vastly over shadowed not only by Arkos and White Rose but Lancaster and Iceberg as well. Some even used Jaune's constant attempts to hit on her as one of the reasons they dislike him. Over time however, White Knight began to grow in popularity, partly due to both Arkos and Iceberg falling though in canon and partly due to a reevaluation of how they feel about the pairing. With Arkos being semi-canon, some fans felt he was over Weiss. After Jaune saved Weiss at the Battle of Haven, the ship had become more popular than it ever had be before gaining more popularity after Weiss accepts Jaunes offer to go to the movies as it showed how far each of the characters had come. It gained further popularity throughout the end of Volume 8, due to the looks they gave each other and the way they were defending each other in the finale. White Knight is Jaune's third most written about ship on AO3 and Weiss's fourth. 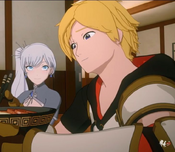 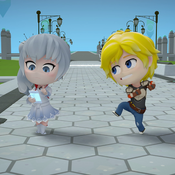 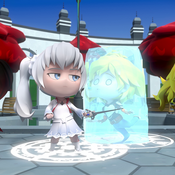 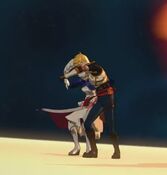