White Rose is the femslash ship between Weiss Schnee and Ruby Rose from the RWBY fandom.

Ruby and Weiss meet at Beacon when Ruby accidently knocks over Weiss' expensive luggage that happens to be full of Dust. This puts the two on bad terms to begin with. When they meet again in the Emerald Forest, Weiss' first instinct is to walk away, leaving Ruby behind, despite the rules being that the first person you see it to be your partner. She only decides to partner with Ruby after seeing that her other option would be Jaune Arc (who has been pinned to a tree by Pyrrha Nikos' weapon in spear form). Their relationship improves over the first volume after Weiss sees how hard Ruby is trying with her school work and leadership duties. She start making coffee for Ruby as a way to support her.

in the Emerald Forest, Ruby kept acting recklessly to prove herself to Weiss. Weiss has since stated that Ruby's hyperactivity and lack of forethought is a big cause of tension between them, while Ruby was irritated by Weiss's bossy and arrogant demeanor. During the day, the two have learned to work together and the tension between them has started to lessen when they both became parts of Team RWBY. By "Players and Pieces", both are able to open to one another slightly but have not become friends yet. Although Ruby appears to try befriending her, Weiss is still annoyed by Ruby's childish antics, as seen in Peter Port's class lesson about the Grimm.

But after Ruby talks with Ozpin and Weiss talks with Port, the two seem to be on better terms with each other. Despite their earlier argument, Ruby acts affably to Weiss when she wakes her up, and Weiss says she believes Ruby can be a great leader, promising to be the best teammate. Although they have reconciled, Weiss is still stern with Ruby when she makes mistakes, such as calling her a "dunce" after she misunderstands Pyrrha Nikos' Semblance of "polarity" as being the power to "control poles", when it actually means controlling magnetism.

By "The Stray", Ruby and Weiss have developed some rapport, and they are seen acting far more friendly to each other. However, after Blake's accidental revelation of being a Faunus and former member of the White Fang, Ruby stills seems to be distressed by Weiss' attitude, as much of which also causes her pain, in sense of being a leader and keeping her friends together.

the two seem to have developed a better and closer relationship, as they both hug and "cry" together after losing a board game to Yang. Ruby also laughs at Weiss' small joke following their battle against Roman in his Atlesian Paladin.

While fighting in the Vytal Festival Tournament, Weiss saves Ruby from being attacked during a match, causing Ruby to excitingly call Weiss her "BFF". While Weiss refutes this label, Ruby nonetheless holds it to be true. Later in the volume, during the Battle of Beacon, Weiss follows Ruby to find Jaune and Pyrrha showing total faith in her. In the aftermath of the battle Ruby learns that Weiss was taken back home by her father, which leaves her visibly saddened.

Weiss is relieved when she sees Ruby again in "End of the Beginning" and goes with her to find Jaune and Pyrrha, showing total faith in her. This also demonstrates her acceptance of Ruby as her partner as she will not let Ruby fight without her.

In "Known by its Song" after being reunited with Ruby, Weiss shares an emotional reunion hug with her alongside Yang. In "Haven's Fate" the two fight together against Hazel, Emerald and Mercury before being joined by Blake. Weiss is shown to follow Ruby's orders without hesitation during the battle. Later when the battle is over, Weiss catches Ruby when she falls to her knees from exhaustion and asks her if she is okay.

Ruby carries Weiss with her in "Argus Limited", the petals have a red to pale blue gradient.

In "The Coming Storm", Weiss questions Ruby about their mission to take the Relic of Knowledge to Atlas, asking if there is a point now that they know that Salem is immortal. She later gets on her leader's bad side in "Alone in the Woods" when she is more doubtful of the mission, but she later apologizes about giving up while they escape from Brunswick Farms.

In "The Lady in the Shoe", Ruby coordinates with Weiss to get close to the Colossus to try and find a weakness. She is later happy when her partner saves her after being thrown off of the mech. In "Our Way", Ruby has Weiss summon her Lancer to ride on to get close to the Leviathan.

She immediately catches Ruby after she falls off the Colossus with her queen lancer Summon in "The Lady in the Shoe", asking Ruby what would have happened if she hadn't caught her to which Ruby replied "I knew you would!" with a wide grin. In "Seeing Red", Weiss slows Ruby's fall with her Glyphs after her partner destroys the cannon of the Colossus. In "Our Way", Weiss helps Ruby in their fight against the Leviathan by carrying her partner on her Lancer summon to the giant Grimm

In "Pomp and Circumstance", Ruby, along with Blake and Yang stay by Weiss' side to stand up to her father, Jacques.

In "Ace Operatives" Weiss is shown to be understanding of Ruby's doubts and reasons for not telling general Ironwood about the truth on Ozpin's disappearance and Salem's immortality, supporting that they'll have to wait that he can be trusted with the truth before telling him.

In "Gravity" Weiss is concerned for Ruby during her emotionnal breakdown after Salem implied that she was responsible for Ruby's mother disappearance.

In "Friends like These" Weiss helps Ruby to end her fight with Harriet Bree by creating a wall of ice while Harriet is charging at Ruby causing her to slam into it and to knock her out. She later goes with Ruby to seek the Winter Maiden.

White Rose is one of the most popular pairings in the RWBY fandom, alongside Bumbleby. People began shipping them as early as the first two character trailers, before the series had started and when little was known about their personalities. Part of its popularity comes from it being a partner pairing to Bumbleby. Those who don't like White Rose will often ship Rose Garden (Ruby x Oscar), Nuts and Dolts (Ruby x Penny), Lancaster (Ruby x Jaune), Freezerburn (Yang x Weiss), Whiteknight (Weiss x Jaune), Iceberg (Weiss x Neptune) or Monochrome (Weiss x Blake) instead. 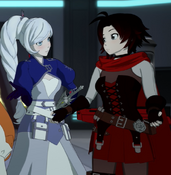 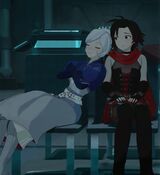 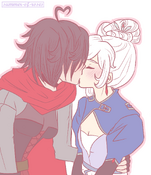