Jester – “You should take a bath. You know they have showers here. It’s possible.”
Caleb – “A what now?”
Jester – “You bathe yourself in water.”
Caleb – “No, I’ve bathed before, yeah, I know what a bath is.”
Jester – “It’s because you smell really bad, and it’s wafting over this direction. I’m just letting you know. I would hate if I smelled that bad and someone didn’t tell me.”
Caleb – “I’ve only just met you.”
Jester – “Hi! I’m Jester.”
Caleb – “Hi, I’m Caleb.”
— First Meetings[1]

Widojest is the het ship between Caleb Widogast and Jester Lavorre from the Critical Role fandom.

Jester, Fjord and Beau are in the tavern when they notice that someone is watching them count their gold. As Fjord points out Nott and Caleb, Jester turns to them and asks if they're staying at the inn. Nott instantly becomes wary of Jester, when she comes over. She tells Caleb that he should take a shower since they do offer them at the inn. Caleb is confused by her comments, and she clarifies that it's because he's dirty. Caleb says that he only just met her and she officially introduces herself and he does as well.

Jester asks Caleb if he is going to the Solstryce Academy, which Caleb isn't. Nott says that there's no point since he's plenty powerful, and even has a fey cat companion. Jester is confused, when Caleb snaps his fingers and Frumpkin appears, causing everyone to freak out. She asks him how long he's had magic and he tells her that he always had it, but didn't start studying again till recently.

“I am slowly— ever so slowly— beginning to like you. Please do not fuck it up.”
— Caleb to Jester[2]

The ship slowly built a following in the Critical Role fandom. Initially most fans had separate pairing but, it gained traction as the series continued. Most cited the moments from Caleb drunkenly dancing with Jester and Jester trying to find ways to cheer up Caleb, even when she isn't that happy.

Fans who are opposed the pairing feel it would end up having a Manic Pixie Dream Girl vibe. This is due to Jester's more upbeat personality being opposed to Caleb's more brooding one, and how often Caleb seems to go to her for guidance. This can also be from past campaign experience, as Vaxleth also gave off a similar vibe that some fans did not enjoy. 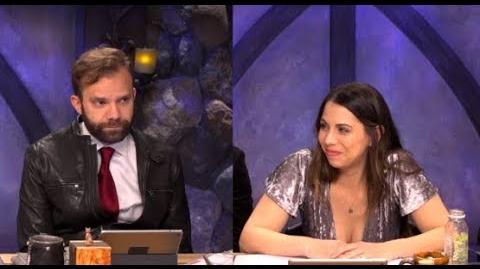 Retrieved from "https://shipping.fandom.com/wiki/Widojest?oldid=174114"
Community content is available under CC-BY-SA unless otherwise noted.