• Anger Born of Worry — Sophie, after Ryan asks her to blow up the car with Ryan in it
• Belligerent Sexual Tension
• Call-Back — Same as Ironic Echo; from 2x14, when they faced off against Cluemaster
• Enemies to Lovers — Sophie even name checks this to her sister, stating it's never gonna happen
• Fake Dating — To suss out Ryan's birth mom
• Holding Hands
• Ironic Echo — “Shoot it, hot shot!”
• Like an Old Married Couple
• One Head Taller
• Opposites Attract
• Passive-Aggressive Kombat — After Ryan learns about Sophie + Montoya, this goes on for about 3 episodes, mostly from Ryan's side
• Post-Kiss Catatonia — Ryan after Sophie kisses her
• Ship Tease
• "Shut Up" Kiss
• Stay with Me Until I Die
• Will They or Won't They?

Wildmoore is the femslash ship between Sophie and Ryan from the Batwoman fandom.

Sophie and Ryan know each other from Ryan's various run-ins with the law and Sophie has her preconceived notions about who Ryan is, despite Ryan being framed, which was the actual reason she was sent to prison. Ryan is at the wrong place at the wrong time once more, when she saves a store owner from armed robbery and the Crows arrest her because she's black and at the scene. Sophie is the one interrogating Ryan and comes in casting dispersions on Ryan based on her prior record. Ryan is cheekily informal in response to being treated that way, which Sophie balks at, trying to command decorum. Ryan shoots back if Sophie got demoted since she's dealing with Ryan's case and Sophie retorts whether Ryan took the fall for her girlfriend yet again, which clearly wounds Ryan who specifies that it is her now ex-girlfriend. Ryan reiterates her innocence and Sophie doesn't believe her, but then gets info that the security footage confirms Ryan's telling the truth. Sophie dispassionately apologises for the inconvenience, which she undermines by telling Ryan to stay away from situations where she might get arrested. Ryan is rightly infuriated by this, pointing out that she can't evade the Crows when they are constantly out for her, unlike Alice, an actual serial killer, whom Ryan insinuates can solely because she's white. Sophie misunderstands and lets slip that while Jacob Kane may have had sympathy for Alice, he no longer does. Ryan is puzzled and Sophie realises her mistake, quickly returning to formality and bidding Ryan goodbye.

Ryan immediately figures out that Alice is Beth Kane and confronts Mary, who confirms it by revealing that Alice killed her mother, too. Luke and Mary get word from a wounded Julia that Alice is planning a big attack and Ryan surmises it must be at the Batwoman rally. With Julia unavailable, Ryan offers to put on the suit to get the people to disperse to safety. It doesn't work, however, as the protestors stay at the plaza, where the Crows have arrived to handle the crowd. Kane wants to arrest people, but Sophie convinces him not to. Alice arrives and fights Ryan until they're swarmed with Alice's Snakebite-infested bats. Ryan acts as Batwoman, jumping onto the plaza to save people, while Sophie is trying to get people out of harm's way as well. A bat flies directly for Sophie, but Ryan knocks it away before Sophie can get bitten. Ryan tells Sophie that the bats are toxin carriers and to to get people to the hospital. Ryan figures out a way to destroy the bats away from people, while Sophie brings people to Mary's clinic. After the ordeal is over, Sophie tells Mary she hopes the new Batwoman is up for whatever Alice has planned.[1]

Sophie – “Last time I came here to meet a Batwoman, the vibes... were different”
Batwoman – “Please say this isn't a booty call[2]”

Ryan and the Bat team are looking for Kate, as are Sophie and the Crows, but Batwoman refuses to co-operate with Jacob Kane, who needs her intel. Sophie convinces Kane to let her try and work with Batwoman, and she lights up the Bat Signal to meet Batwoman. As Ryan arrives, Sophie talks about how the circumstances of her last rendez-vous with Batwoman were different and Ryan balks, telling Sophie her call better not have romantic inclinations. Sophie presses on that Ryan has the wrong idea of the Crows, and when that doesn't work, Sophie confesses to Batwoman that Kate is the love of her life and that she needs Ryan's help to get Kate back. Ryan talks to the team and is adamant that she will not work with the Crows. Mary tries to convince that Sophie is legitimate, but Ryan reiterates how many times Sophie has participated in the Crows arresting Ryan for no reason. Luke convinces Ryan when he confesses to her that the Crows murdered his father, Lucius Fox. She lets Sophie and Kane beat the prisoner who let's slip a connection between the painting and Coryana, which Ryan deduces is a map to the island, and the prisoner uses a cyanide capsule to kill himself. Ryan and Sophie leave the place, with Ryan lamenting to Sophie that Kane pushed him too far and that's why he died. Sophie's got information that the painting is being auctioned off and asks Batwoman to go undercover to get it. Ryan stipulates it must only be Sophie in charge and no Crows at the scene. Sophie agrees and holds out her hand, but Ryan tells her it's a one-off and they are not partners.

Sophie – “You doin' anything tomorrow night?”
Batwoman – “You looking for a date to this thing?[2]”

Ryan barely makes it into the party, with help from a surprise Angelique. She contacts Luke who suggests she try Sophie, and Ryan doesn't want to. When she does, Sophie comments that she's late and Batwoman shares that she ran into an ex, specifying it's a woman when Sophie assumes it's a guy. Sophie remarks she hopes it's not trouble and Batwoman affirms that she always is, telling Sophie to stand by. After doing some surreptitious tests, Luke tells Ryan she needs to steal the painting. While getting the Batsuit in the bathroom, Sophie calls in asking for status and Batwoman tells her she needs to take the painting for further analysis. Sophie confirms they will be monitoring it as an alarm goes off. Ryan fights Wolf-Spider for the painting, but her Kryptonite wound lands her a fall. Sophie radioes in if Batwoman needs medical help, but Batwoman tells her to slow Wolf-Spider's escape so she can catch up. Sophie sends two Crows to get the painting and they do so by hitting Wolf-Spider with the car and leaving him for death. Batwoman comes upon the vigilante, unmasks him and brings Evan to Mary's clinic where Mary confirms he was close to bleeding out. Ryan is livid that she went against her gut feeling to not work with the Crows. Sophie calls Batwoman and shows her the badges of the culprits, but Batwoman is not impressed with their firing when the institution itself is racist and murderous. Sophie tries to defend her position, saying she is trying to change it and that she believes in the mission of the Crows. Batwoman tells her that she will no longer work with Sophie until she quits the Crows.[2]

Sophie – “Badges of the Crows who did this”
Batwoman – “That's not enough. Burn it all down, girl, the whole thing[2]”

After learning the painting they got is a fake, Sophie goes to see Ryan at The Hold Up to get Ryan to get information from Angelique on Ocean's whereabouts, as his prints were on the fake and they believe he has the real one, with the map. Ryan is loathe to sell out Angelique in any way, and Sophie painfully points out that Angelique is still dealing even though Ryan was imprisoned because of it, basically arguing that Angelique doesn't deserve Ryan's loyalty. Ryan acquiesces if she can protect Angelique from Sophie and the Crows. Ryan exchanges the info fo Angelique's file. Sophie tries to sympathise, but Ryan balks at the notion, saying she doesn't understand. Sophie reiterates that she doesn't understand Ryan's dedication since Angelique caused Ryan's imprisonment. Ryan seemingly has enough and retorts that Sophie must never have loved. Sophie says she has, but Ryan tells her that since Sophie's now alone it must mean she doesn't fight for those she loves. Sophie is visibly hurt and leaves The Hold Up without another word. She tracks Ocean and finally gets the map, but gets a call from Luke that Mary and Jacob Kane are in danger at Mary's clinic. Sophie goes to save them, but is knocked out. Batwoman arrives at the last second and asks them to go, but Kane refuses to leave Sophie behind. Batwoman promises that she will protect Sophie and they escape. Sophie enters the room held at gunpoint and, with fear in her eyes, tells Batwoman not to give the gunman the map. The gunman says he'll kill Sophie instantly if Batwoman doesn't hand over the map and she does to save Sophie's life. Later on, Sophie listens in on conversation with Angelique, where Angelique reveals that she knows what Ryan did. They fight and Ryan breaks down, saying Ange is the only person who knows her and that Ryan needs her. Ange is hurt and leaves Ryan devastated and feeling alone. Sophie puts down the headphones and feels for Ryan.[3]

Luke gives Sophie the coordinates for Coryana and asks her to get there immediately. Sophie deduces he got the info because he's working with Batwoman and asks why she needs Sophie's help. Luke tells Sophie that Batwoman is dying and that she needs to bring black a Desert Rose flower to save Batwoman's life. Ryan is in disbelief that Luke told Sophie and reiterates her distrust in Sophie, but Luke tells her it's better than both Ryan and Kate dead, and that Sophie is trustworthy. On feed, they see Sophie tell Kane that they need the Desert Rose, to Ryan's surprise. After watching Safiyah's men abduct Sophie and Kane, Ryan takes the adrenaline/cortisol injection to fly to Coryana herself and save everyone, with now only 24 hours to live.[4]

are you feeling it too? | SYD B
they get together[5]

Wildmoore quickly became a popular enemies-to-lovers ship following Ryan's introduction and was cemented as a contender for main ship against the erstwhile Kanemoore when Batwoman was dying on Coryana and Sophie agreed to sit by her side. Even as Kate returned in Season 2 to provide closure for the character, Wildmoore has become very popular and one of the most prevalent ships on the show, alongside Kanemoore. There isn't really any warring in this fandom, as there are so many gay ships and romantic undertones to various pairings everyone just has fun with it. 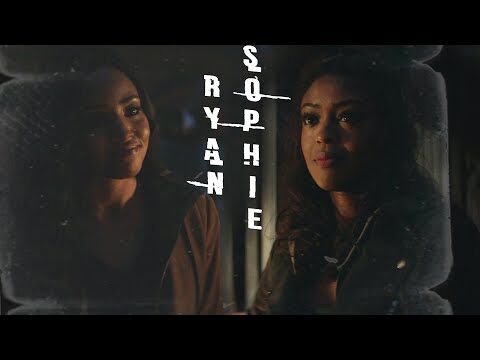 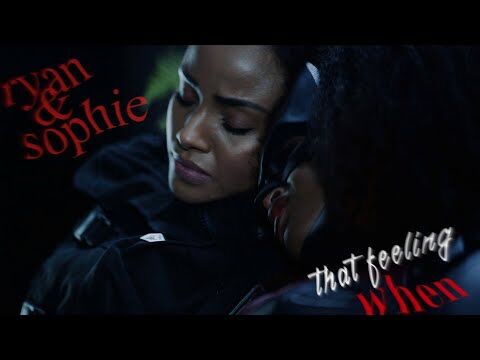 Ryan & Sophie - That Feeling When

〉The “just shut up” kiss is one of my favorite TV tropes, but Sophie doesn’t want to shut Ryan up because she’s tired of her talking. She wants her to realize that yeah, Ryan has a lot on her shoulders right now, but Sophie has two hands and is ready to help carry some of it. As soon as Ryan’s shock wears off and she realizes what’s happening, her face immediately relaxes and eventually forms a smile when Sophie walks away leaving her speechless.