Shipping Wiki
Register
Don't have an account?
Sign In
Advertisement
in: Ships, Ships/Femslash, The Owl House/Ships,
and 5 more

Willuz is the femslash ship between Willow Park and Luz Noceda from The Owl House fandom.

Luz and Willow strike up an easy friendship after Luz offers to be Willow's abomination for a class she is otherwise failing. Despite this leading to Luz being banned from Hexside, the two remain friends and Willow offers to teach Luz about magic in the mean time. Willow later accompanies Luz to The Covention, a convention of the covens of The Boiling Isles. While there, they walk arm-in-arm while looking at different coven booths.

During "Hooty's Moving Hassle" Willow is excited to take part in a moonlight conjuring with Luz and Gus, as their newly formed friend group now has enough people to perform the ritual. After said ritual gets the group thrown of a cliff by beast hunters, Willow opens up slightly about how she and Amity used to be friends as children, which fascinates Luz.

Willow waits for Luz to find a better outfit for attending a grudgby game in "Escape of the Palisman" despite the bus leaving as she did not want to go without Luz. To make up for missing the bus Luz takes Owlbert without permission from Eda so she can fly them to game.

When Luz is finally able to attend Hexside as a student she is happy to be in Willow's company again. After being put on the detention track Luz reaches through the barred windows of the classroom to pat Willow's cheeks as she missed her. Willow promises to find a way to get Luz out and later comes to free her.

In "Understanding Willow" Luz and Willow work together in class to magically develop photos of Willow's memories, which shows more of Willow's and Amity's childhood friendship. Luz is determined to help them become friends again, though Willow is against the idea. After Amity accidentally sets fire to all of Willow's photo memories, causing her to loose the memories in her consciousness as well, Luz brings Willow to Eda in order to help her. She works together with Amity to repair the memories as well as Willow's relationship with Amity to a degree. Once Willow is better Luz rushes to hug telling her "I'm gonna hug you so hard you'll never forget me again!"

Willuz is a smaller ship in the Owl House fandom but is generally well liked thanks to their close friendship within the series. Their genuine affection for one another is also part of their appeal as it differs from other popular ship dynamics in the fandom that are more steeped in the enemies to lovers setup, as seen with Boschlow and Lumity. Ice skating AU's became a common theme for fanart and AU's after the Owl House's animation supervisor Spencer Wan drew the pair skating together in a charity stream. 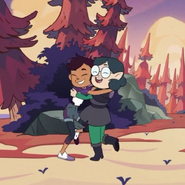 Willumity refers to the ship between Willow, Luz, and Amity