Winniac 5 is the slash ship between Winn and Querl Dox from the Supergirl fandom.

Winn finishes his tour of the DEO to Brainy in the main hub. Brainy calls it incredible which Winn takes as a compliment, before he starts calling the technology slow, and unreliable.

When the ship begins to rock, Imra calls back to the DEO and asks Brainy what’s wrong. He replies that it’s only some turbulence, which Winn repeats. Brainy takes it to mean that he doesn’t know what turbulence is and starts to explain, when Winn interrupts by yelling that he knows what it is.

The DEO loses contact with the ship, and Brainy asks about possible tech that could boost their single, but Winn says they don’t have any that could reach them. Brainy starts to become stressed and says he needs space to think. Winn tries to suggest an idea but Brainy just yells that he needs space. Mon-El pulls Winn away telling him to leave Brainy alone when he gets like that.

They’re down to 18 minutes. Winn suggests curving the signal around the star, but Brainy rejects the idea. They need to boost the signal instead. He wants to use cold fusion, but Winn shakes his head no and yells that cold fusion hasn’t been invented yet. Brainy becomes frustrated at the outdated technology, as Winn comes up with the idea of using the Voyager probe to bounce their signal off of. J’onn and Mon-El congratulate Winn on his idea as Brainy looks on confused.

The DEO is able to get through. Winn is ecstatic to get through as Brainy calmly ignores him and talks his way through a solution. Winn asks if they found the priestess, which Imra says yes but that Reign is there. Winn tells her to go protect Kara but Brainy needs Imra there to control the ship.

Winn is infected by Pestilence and taken to the DEO infirmary, where Brainy is able to give him the Legions cure. He asks Winn to tell him who scratched him, but Winn is way out of it and starts to describe Freddy Kreuger, which Brainy takes seriously before Kara tells him the truth.

SHELTER FROM THE STORM

The Legion is about to leave, and Brainy is lamenting to Winn about his time with him. He tells Winn that he was smarter than he expected. Winn sarcastically thanks him, but Brainy wants to thank him for all his help and hands him a jar filled with dirt. Winn asks if it's from space, but Brainy clarifies that it's from 31st Century Earth. Winn is amazed and asks how Brainy new he collected dirt. Brainy explains that he used a calculation and figured it was either dirt or baseball cards. He asks if they should embrace and goes to grab Winn's face, who moves his hands and says they're going to bro-hug. They try and figure it out before settling into an awkward hug.

Winn walks into the DEO conference room, where Brainy and Mon-El are talking, asking why J'onn told him Brainy wanted to speak with him. Mon-El is about to send him away, but Brainy says that what he has to say concerns both of them. He says that the Legion needs them both and explains how that destroying Blight saved a lot of people, including an evil distant relative of his, who created a plague to wipe out AI's in the future, and he can't go back. He wants Winn to take his place at the Legion, who is shocked. He starts denying his own abilities, but Brainy places a piece of paper from the archives of the future, one with Winn's design on it. Brainy tells him that the design is the basis of a lot of tech in the future, and tells him that the future needs Winn. Winn tells James about Brainy's proposal, completely in disbelief the whole time, but James eventually gets him to make a decision.

Winn decides to leave, but before he does, he leaves a note on Brainy's desk. It's attached to the same design from the archives of the future.

Fans wanted to see the two interact after Brainy's introduction on Supergirl, due to their similar roles on their respective teams. They didn't have to wait long as they interacted in the next episode. Shippers took to their similar love of technology. Shippers also enjoyed the idea of Winn showing Brainy things from modern day pop culture. They also enjoyed Brainy's inability to be normal in social situations and Winn trying to navigate through that. 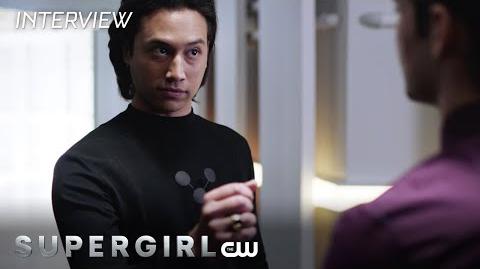 Retrieved from "https://shipping.fandom.com/wiki/Winniac_5?oldid=174655"
Community content is available under CC-BY-SA unless otherwise noted.