Best Friends; both are dead

“Lupin was lowering his wand, gazing fixedly at Black. The Professor walked to Black’s side, seized his hand, pulled him to his feet so that Crookshanks fell to the floor, and embraced Black like a brother”
— Remus reunites with Sirius[1]

Wolfstar is the slash ship between Sirius Black and Remus Lupin from the Harry Potter fandom.

Sirius and Remus met at Hogwarts in their first year. They, along with James Potter and Peter Pettigrew, became close friends, collectively known as the Marauders. They (except for Peter) were known to be exceptionally bright students with a passion for mischief and were generally well-liked by their teachers and peers.

In their second year, Sirius, James and Peter discovered that Remus was a werewolf. At some point, James, Sirius and Peter decided to become Animagi (a wizard who can transform into an animal at will), as this would make werewolf transformations more bearable for Remus, By their fifth year, Sirius completed the Animagus transformation was able to become a shaggy black dog known as Padfoot, along with James who became a stag and Peter who became a rat. Every full moon, Sirius and the others would sneak out and meet up with Remus in the Shrieking Shack.

After they graduated from Hogwarts, they joined the Order of the Phoenix together. However, when they became aware that there was a spy in the Order, Sirius had suspected Remus. This led to him not telling Remus that he had switched places with Peter as the Secret Keeper for the location of their friend James and his wife Lily. As such, when the Potters were betrayed, Remus (along with the rest of the country) believed Sirius was guilty. At the time of Lily and James' death, Remus was in the north of the country on Order of the Phoenix business when he discovered what had apparently happened. This was one of the most traumatic events of Remus' life, especially since, within the next day, he would also be losing his other two best friends. Sirius was imprisoned in Azkaban for supposedly murdering Peter and twelve Muggles with one curse.

They were separated for twelve years during Sirius' imprisonment in Azkaban. In 1993, Remus discovered that Sirius was innocent when he spotted the supposedly-dead Peter Pettigrew on the Marauder's Map, and was reunited with his old friend. They both apologised for doubting each other, but had to separate again as Sirius went on the run from authorities. When Voldemort returned in human form, they both rejoined the newly reformed Order and fought against Death Eaters together, including at the Battle of the Department of Mysteries, during which Sirius is killed. Remus was extremely upset by Sirius' death. Nearly two years later Remus is killed in the Battle of Hogwarts, and Harry sees them both (along with his parents) when he uses the Resurrection Stone, implying that they are in the same place after death.

“"Professor Lupin?" [Harry] said. "If you knew my dad, you must’ve known Sirius Black as well." Lupin turned very quickly. "What gives you that idea?" he said sharply. "Nothing — I mean, I just knew they were friends at Hogwarts, too…" Lupin’s face relaxed. "Yes, I knew him," he said shortly. "Or I thought I did. You’d better get off, Harry, it’s getting late."”
— Harry Potter and the Prisoner of Azkaban

“"Professor Lupin," Harry interrupted loudly, "what’s going — ?" But he never finished the question, because what he saw made his voice die in his throat. Lupin was lowering his wand. Next moment, he had walked to Black’s side, seized his hand, pulled him to his feet so that Crookshanks fell to the floor, and embraced Black like a brother.”
— Harry Potter and the Prisoner of Azkaban

“"Ready, Sirius?" said Lupin. Black had already retrieved Snape’s wand from the bed. He approached Lupin and the struggling rat, and his wet eyes suddenly seemed to be burning in his face. "Together?" he said quietly. "I think so," said Lupin”
— Harry Potter and the Prisoner of Azkaban

“Ron, Hermione, Fred and George’s heads swivelled from Sirius to Mrs Weasley as though they were following a tennis rally. Ginny was kneeling amid a pile of abandoned Butterbeer corks, watching the conversation with her mouth slightly open. Lupin’s eyes were fixed on Sirius. ... "Personally," said Lupin quietly, looking away from Sirius at last”
— Harry Potter and the Order of the Phoenix

“"Yes," said Mrs Weasley, her lip curling, "the thing is, it’s been rather difficult for you to look after him while you’ve been locked up in Azkaban, hasn’t it?" Sirius started to rise from his chair. "Molly, you’re not the only person at this table who cares about Harry," said Lupin sharply. "Sirius, sit down." Mrs Weasley’s lower lip was trembling. Sirius sank slowly back into his chair, his face white.”
— Harry Potter and the Order of the Phoenix

“Sometimes, however, the visitors stayed to help. Tonks joined them for a memorable afternoon in which they found a murderous old ghoul lurking in an upstairs toilet, and Lupin, who was staying in the house with Sirius but who left for long periods to do mysterious work for the Order, helped them repair a grandfather clock”
— Harry Potter and the Order of the Phoenix

“Sirius and Lupin had given Harry a set of excellent books entitled Practical Defensive Magic and its Use Against the Dark Arts, which had superb, moving colour illustrations of all the counter-jinxes and hexes it described.”
— Harry Potter and the Order of the Phoenix

“"Of course he was a bit of an idiot!" said Sirius bracingly, "we were all idiots! Well — not Moony so much," he said fairly, looking at Lupin. But Lupin shook his head. "Did I ever tell you to lay off Snape?" he said. "Did I ever have the guts to tell you I thought you were out of order?" "Yeah, well," said Sirius, "you made us feel ashamed of ourselves sometimes… that was something…"”
— Harry Potter and the Order of the Phoenix

“"He can’t come back, Harry," said Lupin, his voice breaking as he struggled to contain Harry.”
— Harry Potter and the Order of the Phoenix

Remus Lupin – “Sirius, be quiet.”
Sirius Black – “Be quiet yourself, Remus!”
Severus Snape – “Oh, listen to you two, quarreling like an old married couple.”
—Harry Potter and the Prisoner of Azkaban (2003)

One of the most popular slash pairings in the fandom, especially of the parent generation. The film portrayal of this relationship also helped a great deal to further the ship's popularity, with Snape saying they're "quarrelling like an old married couple". Before the release of Harry Potter and the Half-Blood Prince in 2005, many fans believed that Remus and Sirius were intentionally being written as queer, and were disappointed when the Remus/Tonks relationship appeared to erase the possibility. Since the release of JKR's statements on the transgender community that started in 2020, the Wolfstar fandom as a whole has shifted to a "death of the author" stance, and arguments that Rowling's authorial intentions are not pertinent when interpreting the books continue to rise. 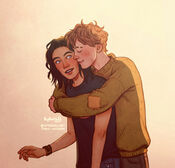