XiangQing is the femslash ship between Xiangling and Keqing from the Genshin Impact fandom.

Keqing has a voiceline about Xiangling. She says she gets that Xiangling is gifted, but that her cooking can be a hit-or-miss. Keqing mentions that she was all ready to hire Xiangling for a small banquet, but quickly turned off to the idea due to the amount of lizard and slime that was put in her sample dish.

In the Moonchase Festival event, Xiangling asks Keqing if she can tag along with her investigation. Xiangling says that she might be able to get some great inspiration along the way and promises Keqing that she'll help. Keqing accepts the offer, and Xiangling thanks her for this and tells her that she's the best.

The group stops at Wangshu Inn, where they sit down for a meal together. To Xiangling and Keqing’s dismay, Guoba eats Keqing’s food while she is distracted. Xiangling apologizes profusely and offers to make Keqing any dish she would like. Keqing asks Xiangling to try making her grandfather’s recipe, and they return to Wanmin Restaurant so Xiangling can cook the dish.

After returning to Liyue, Keqing tells the Traveler that she has something to discuss with them in private. Keqing asks the Traveler what she should do to get along with Xiangling. The Traveler is surprised, having thought that Keqing didn’t needed advice from anyone because she seemed so smart and intelligent. Keqing replies that Xiangling has been so warm and friendly to her and that she doesn’t know how to respond. She wonders if she and Xiangling are already friends. Traveler gives Keqing advice and leaves to ask Xiangling’s opinion.

The Traveler goes to Wanmin Restaurant, and Paimon explains to Xiangling that they have noticed she and Keqing have been getting along pretty well. Paimon asks if she likes hanging out with her, to which Xiangling says yes. She says that Keqing is good-natured and easy to be around, the kind of person everyone likes. Paimon is surprised that Xiangling was never intimidated by Keqing. Paimon mentions to the Traveler that Xiangling's intuition for people seems really spot-on considering she took a liking to Keqing so quickly.

Keqing comes back to Wanmin Restaurant and gives Xiangling the recipe. Xiangling takes a look at the recipe and says that she needs some time to look at it properly.

Before the cooking competition begins, Keqing tells Xiangling that such an accomplished chef as her will definitely make it to the finals.

After Xiangling wins the competition, Traveler finds Keqing standing alone outside Yujing Terrace. Keqing tells Traveler that she voted for Smiley Yanxiao and worries that Xiangling will be upset by this. Xiangling finds them and Keqing tells her the truth, to which Xiangling responds that she’s glad Keqing voted without bias. She asks if Keqing was worried about being a bad friend, which causes Keqing to get flustered. Xiangling says that what she loves about Keqing is how conscientious she is, but that she shouldn’t have to think about things so thoroughly when she’s with friends.

“Yeah, the up-and-coming chef from Wanmin Restaurant... I get that she's gifted and everything, I just think her cooking can be a bit hit-or-miss. I was all ready to hire her for a small banquet once, and give her full control over the menu... but the amount of lizard and slime in her sample dishes quickly turned me off to that idea!”
— Keqing's voiceline about Xiangling

“I love this about you - you’re just so conscientious about everything.”
— Xiangling to Keqing

XiangQing is considered a rarepair in the Genshin Impact fandom. The ship only recently gained attention through the Moonchase event, which focused on the two of them. Despite the development their relationship was given in canon, XiangQing still has a rather small fanbase. This is mainly due to Keqing having already been involved in the massively popular Ganqing ship with Ganyu.

It is the rival ship of Ganqing, Aeqing, ZhongQing, Chongling, Taoling, Xianglumi, Xiangyan, and Qingguang. It currently has fewer than 10 works on Archive of Our Own. 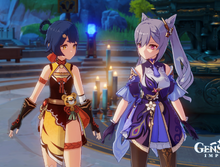