Xianglumi is the femslash ship between Lumine and Xiangling from the Genshin Impact fandom.

Lumine and Xiangling first met each other in Xiangling's Story Quest, named "Trulla".

In their first meeting, Xiangling pulls Lumine to her in the bush, so that she doesn't scares the wild boars away. Xiangling tells Lumine that she should be quiet, because she is on the hunt. Xiangling enthusiastically explains to Lumine that she has heard, that Mondstadt has a lot of great ingredients and that, that seems indeed to be true. Later, Xiangling and Lumine finally introduce themselves to each other. Xiangling then asks Lumine, if she could help her with the hunt. Although, Paimon was initially to lazy to hunt, Xiangling manages to convince Paimon and Lumine to hunt for her, with promising both that she will cook something really delicious for them.

Lumine then brings Xiangling some meat. However, Xiangling completely forgets Lumine and thinks about what ingredients she should cook with the meat. Luckily, Xiangling notices that Lumine and Paimon are still there and quickly apologizes for forgetting them. She then gives them the promised meal. Amazed by Xiangling's cooking skills, Paimon asks Xiangling how she cooked the dish. Xiangling mentiones that she doesn't has a recipe for the dish, but that she can cook the dish another time, together with Paimon and Lumine. Then at some time, a boy comes to Lumine, Paimon and Xiangling and asks what the three are doing. The boy says that they can't hunt here, because the forest is a sanctuary for wild boars. Xiangling, Lumine and Paimon then go to Quellingen to apologize by Draff for hunting in the forest.

Xiangling, Lumine and Paimon in Quellingen apologize to Draff, for hunting in the forest. Draff forgives them. Likely, because Draff seemingly has heard of Xiangling, as he calls her, "The big cook". Draff then says that if someone like Xiangling would cook for Quellingen, Quellingen's reputation would rise. However, Xiangling declines. Xiangling and Draff then talk for a while and at some time, Xiangling somewhat angry attempts to leave. Lumine and Paimon follow her. Xiangling then smells something delicious and then goes to a woman that is cooking. Xiangling then first talks with Brook (the woman) about cooking but then the two begin to argue. Lumine tries to calm the two down. After the two finished arguing, Xiangling and Brook agree on a cooking battle and who wins is allowed to cook for Quellingen.

Xiangling then attempts to go to Liyue to get exoctic ingredients to win the cooking battle and Lumine follows her. After Lumine catched up with Xiangling. Xiangling says to Lumine that she needs good ingredients to beat Brook in the cooking battle. Lumine then gets some yuyeon-peperoni and lotus fruit for Xiangling. But even after Lumine gave Xiangling the yuyeon-peperoni and lotus fruit, she still says that there is still a certain ingredient missing. Xiangling and Lumine then go look for that certain ingredient together. After searching for a bit, the two find a hunter that is almost freezing to death. After he has warmed up, Lumine and Xiangling ask him what has happened, he answers that he stupidly came across a really large fluxe ice tree. Xiangling then goes in the ruin to kill the fluxe ice tree, because she thinks that might be that certain ingredient, that she needs to win the cooking battle and Lumine follows her in the ruin.

After the two defeated the fluxe ice tree. They also find a a long, extinct, wild boar that was frozen. With the ingredients, the two go back to Quellingen, were the cooking battle finally starts. Lumine helps Xiangling, with cooking the dishes and Xiangling wins the cooking battle. Xiangling thanks Lumine for her help. And as a thank you, she invites her to eat at the Wanmin restaurant and says that she will cook something delicious for her and that she can teach her some dishes. Finally, Xiangling says goodbye to Lumine and goes back to Liyue.

“Thanks, you guys. Without your help, I don't know how it would have gone today.”
— Xiangling to Lumine

“Come and visit me at the Wanmin Restaurant some time. I did promise I'd cook for you! And if you want, I'll teach you how to cook some of my latest inventions too.”
— Xiangling to Lumine

“ As my mentor always says: "To make a five-star dish, you need ten-star passion!" I know, I know! To be able to come this far is definitely thanks to your ten-star passion when it comes to practicing with me, so I'll be sure to pay you back with two-no, three times the passion!”
— Xiangling's Feelings About Ascension: Conclusion

“Anything to put a smile on your face!”
— Xiangling to Lumine

“I was all-prepared to hop into the kitchen, but my dad told me that I couldn't help out at the restaurant on my birthday, and instead I should go hang out with friends... Oh, what have you been up to these days? Picking Matsutake!? Gathering Bird Eggs!? Catching Slimes!? ...Wait, that's what I usually do. Hmm... You've been... looking for chests? Whatever! Let's go have some food. There's nothing more enjoyable than cooking a tasty meal for friends! I'll make you some of Wanmin Restaurant's authentic Boiled Fish! And then, you can tell me what you think of the flavor!”
— Xiangling's Birthday Mail

“Guoba was causing a bit of a ruckus early this morning. It took me some time watching his gesticulations to realize that he wants you to come and celebrate my birthday with me! And you know what? I was just looking for you too! I caught some fish in the harbor today. They weren't the prettiest, but they were super fatty. So I gave cooking them a go, and they tasted divine! Why don't you try some? Here, have some whole fish, too — just in case you wanna have at them yourself! I'm sure you'll figure out what to do. Actually, hmm... What shall we do after dinner... You know what? How about you decide? We've got all day. We can grab some food, bring Guoba along, and go anywhere you want!”
— Xiangling's 2nd Birthday Mail

The ship currently has 19 works on AO3. 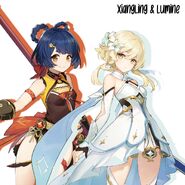 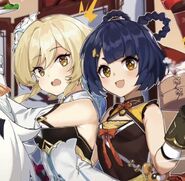