XiaoVen is the slash ship between Xiao and Venti from the Genshin Impact fandom.

Xiao's 5th Character Story tells about a time when he was fighting evil from dusk till dawn, and just barely emerged victorious. Exhausted, he began to feel the hatred that tainted his body; it flooded his senses, and he fell to the ground. There's no telling what would have happened if not for the sound of a flute that got carried to Xiao by the wind, which protected and calmed him, bringing him back to his senses. Xiao suspected the sound to come from Venti, being a deity, and it was later confirmed in the story teaser "Yakshas: The Guardian Adepti". In the teaser, it is shown that three of the original Yakshas had died and the fourth succumbed to darkness and disappeared without a trace. It is safe to assume that if not for the Dihua flute, which can be seen played by Venti, Xiao too would've gone down the same path as the other four Yakshas. In a way, Venti saved Xiao. From Xiao's voiceline, he seems to remember, or at least know, that it was Venti who he heard on that day.

Their personalities somewhat contrast as Xiao is seen to take his duties very seriously while Venti is rather frivolous and likes to drink frequently, leaving the ruling of Mondstadt to its people and the knights. Xiao is described as polite, reserved, and he prefers to be alone, appreciating the peace and quiet; Venti, on the other hand, has a very playful personality and enjoys playing songs across Mondstadt. While their ages are unconfirmed, they are both over 2,000 years old canonly, but take the form of young adults.

They both have Anemo visions and share a similar color scheme.

In Xiao's voice line about Venti, he is about to comment on his tunes before reconsidering and doesn't, telling the traveler to "forget it". It is possible that Xiao wanted to mention something about Venti's music saving him, but rethought it, or that he simply wanted to compliment them.

“Venti? So that's the name he goes by. His tunes are... Ugh, forget it.”
— Xiao's voiceline about Venti

“And only on moonlit nights, in the glow from Guyun and in the sound of the Dihua flute is his memory preserved.”
— Zhongli, "Yakshas: The Guardian Adepti" story teaser

“He longs for a day to come when he will wear the mask and dance — not to conquer demons, but to the tune of that flute amidst a sea of flowers.”
— Xiao's namecard

“Hiding? I'm hiding nothing. I just won't speak of desire to others. Do mortals not have a rule about spoken wishes never coming true? Hm? What do you mean that's not the same?”
— Xiao's voiceline about his vision (it is possible that the desire he refers to in this voiceline is the same mentioned in his namecard)

“[...] Long exhausted, Xiao felt the divine hatred that tainted his body take effect. Limitless hate flooded his senses, and he fell to the ground in agony. But it was also at that moment that the pain vanished without warning. This was not by Xiao's own strength, for he had been rescued by the sound of a flute. The clear, lovely sound of the flute came over the mountains and rivers, carried on the wind to where he lay. [...] It protected Xiao, massaging his wild senses, and giving him a moment's peace. Who was playing this music? Xiao was curious but did not pursue the matter. For he already had something approaching an answer. The last person who could help him was one of The Seven themselves. So this person, too, must be—”
— Xiao's Character Story 5

“[...] Tubby explained its presence to you thusly: that Madame Ping had arranged for her to prepare this particular villa after hearing that a certain bard had visited another adeptus's abode recently. Seeing as how you are quite familiar with this fellow, you never know when you might need just such a place.”
— Mondstadt Mansion: Windward Manor description (it's confirmed that the "certain bard" is Venti and the adeptus that was mentioned is possibly Xiao)

The two do not have any interactions in the main story as of present, so the fandom relies on lore, trailers, etc.

XiaoVen started off as a couple of fanarts until the trailer released and fans were stirred at the sight of Xiao overlooking a sea whist Venti played his flute. Since then, the ship has seen immense growth with over 1400 fanfics on AO3, over 463 posts on Instagram, and 340 tweets on Twitter in the past hour. XiaoVen has gained large popularity since Xiao is often seen as off-putting and dislikes human affairs though seems to be interested (in a sense) in Venti, or perhaps his flute playing.

In fanfiction and fanart, it is mostly showcasing Xiao being protected or comforted by Venti.

While most ships so far have been characters from the same region, Xingyun, JeanLisa, etc. XiaoVen is one of the only ships where the two characters are from different regions and is the only ship currently to have one character from Liyue and the other from Mondstadt. While Xiao is faithful to Morax and Liyue itself, and probably doesn't venture outside of its grounds, Venti is known for his free-spirited/wandering nature and has canonically visited Liyue multiple times to have a drink with his fellow Archon, leading to the events shown in Xiao's trailers (eg. Venti playing a dihua flute and helping Xiao with his karmic debt). 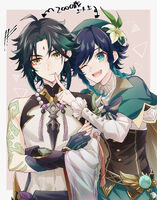 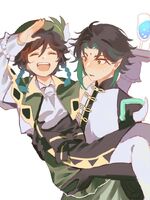 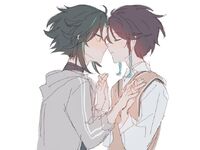 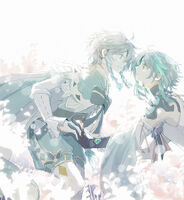