Xiaoyu is the het ship between Xiao and Ganyu from the Genshin Impact fandom.

Xiao and Ganyu are both immortal adepti, and both fought in the Archon War. Though they never interact on screen much in the canon storyline, they are acquainted with each other. In Ganyu's voiceline about Xiao, she remarks about how she's wary of teaming up with him, as all of his previous partners have passed away; in Xiao's voiceline about her, he remarks about how it must be easy for her to become perplexed regarding her identity as she so frequently wanders between the human and adepti realms.

In Ganyu's story quest, she sets out to undergo a series of trials set up for her by the other adepti in order to integrate herself back into their society, as she felt out of place and unwelcome in Liyue Harbor after the events of Act I.

After finishing Cloud Retainer's trials, the traveler and Paimon ask if they'll be going to Mountain Shaper or Moon Carver next. Ganyu says neither, and that she will see the Conqueror of Demons, Xiao, instead, as he is the only one who can unlock her full potential. She states that she'd found him offputting and unnaproachable at first, but that she has to face him if she truly wants to return to the adeptal world.

Once she and the traveler arrive at their designated meeting spot in Nantienmen, Xiao informs her that she is half an hour late, remarking that it must be because she hasn't yet abandoned her human-like habits. Ganyu tries to explain that she was tardy because of her meeting with Cloud Retainer, but he cuts her off, saying that he needn't hear any excuses or to develop a mutual understanding betweenthe two of them: he is simply helping her train.

Xiao tells Ganyu that she is neither adeptus nor human, but rather something in-between frequently crossing the line separating the two. He tells her to face her own true self instead of trying to explain her behavior to him. She understands this, and tells him she has nothing to hide. The exchange makes the traveler note that Xiao is a good teacher despite what they had thought at first, and that he seems to understand Ganyu quite well.

He proceeds to tell her that the body and mind are one, and one can rely on one's body if their mind fails them; thus, he designed a trial to test her physical capabilities. This contrasts her previous trial with Cloud Retainer, which was meant to try her spirit.

After successfully completing the test, Ganyu informs Xiao of the fact. He, however, says that there is no need to report to him: his--and other people's--validation will never benefit her training, and that she is the only one who can evaluate how well she did. Ganyu understands this, and Xiao's final words to her are that he will raise the training difficulty for the following day.

“Ganyu is neither mortal nor illuminated beast. Wandering both the mortal and Adepti realms with duty as her sole guide, it was inevitable that she would become perplexed... What? Me? You believe a Yaksha who knows nothing more than how to massacre countless souls and emerge unscathed is a suitable mentor for such an individual? ...Your mind occupies a very different world from that which your body inhabits.”
— Xiao's Voiceline about Ganyu

“He seems like a bit of an outsider, socially. Probably just his personality... I can understand that, to be honest, but I'm not really about to try and get close to him. I mean... all the people he's ever agreed to team up with are no longer with us...”
— Ganyu's Voiceline about Xiao

Xiao — The trial I've prepared for you will explore the true potential of your body.
Ganyu — Yes, I'm ready.
— Sinae Unicornis Chapter Act I

Xiao — You don't have to report back to me. Seeking other people's validation won't benefit your training.
Xiao — Only you can evaluate the result of this trial. You'll progress faster that way.
Ganyu — Um... Understood.
— Sinae Unicornis Chapter Act I

This became a ship due to Ganyu's Story Quest and the two's interactions with each other. Xiaoyu is a rather small ship, but has a growing fansbase; there are over 150+ fanfictions written for the ship on AO3. Most of the fan content mainly includes soft and innocent concepts between the two, such as hurt/comfort due to Xiao's heavy karmatic burden.

Sometimes, fans of the two like to refer to Qiqi as Xiao and Ganyu's child. As she does not know either of them well, this is most likely because Qiqi is the only currently playable child Liyue character. However, it is notable that she shares Ganyu's light-blue hair.

Xiaoyu's main rival ships are XiaoVen, Xiaother, and Ganqing. Some non-shippers may few these two with a family-type bond due to them both being adepti. 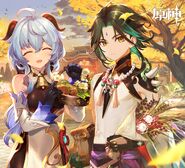