XingTao is the het ship between Xingqiu and Hu Tao from the Genshin Impact fandom.

Hu Tao and Xingqiu are both best friends according to their voicelines and Hu Tao's 5th character story. They have yet to interact on-screen in quests. When they first met, they immediately hit it off and became close friends quickly. They compose poetry together and even have poetic spars.

They were featured fighting the Primo Geovishap together in PlayStation®5 Announcement Trailer. Even in gameplay, their playstyles are made for each other. No other hydro character vaporises Hu Tao's charged attacks as well as Xingqiu, to the point Hu Tao practically needs him to reach her damage potential. Xingqiu is Hu Tao's best support and utility character, and a Hu Tao team is incomplete without him.

According to their voicelines, Xingqiu is one of the few people in Liyue who see Hu Tao in a positive light and gets along with her. He genuinely wants to understand her by finding out what she's really after. Hu Tao likes to tell Xingqiu about her adventures so he can incorporate her stories in his writings.

Hu Tao is best known for her the creation of poetry. She dubs herself the "versemonger of the darkest alleys," and free verse flows forth untamed from her mouth whenever she has free time to be out on the streets. The "Hilitune" is Hu Tao's most famous work, well-loved not only by the people of the harbor, but ever on the lips of children as far as Qingce Village as well. Hence, she became quite famous and hobbyists and critics often talked about her.

Xingqiu, ever immersed in books, also wanted to meet this strange person, and so chose an auspicious date to visit, bringing a gift with him. The two hit it off immediately, and they exchanged pointers and impromptu poetry in Wangsheng's main hall — and when faced with the poetry of Xingqiu's traditional, artistic bent, Hu Tao could always return in kind with some strange and marvelous verse.

And there was meaning in the chaos, indeed, a rhythm to the bizarre that anyone could perceive, and it was catchy, too. Thus did she "beat the old master with untrained fists," leaving Xingqiu at a loss for words. At length, the poetic spar ended amiably, and they have been friends ever since, reading and composing poetry with one another when they have the time to meet. Over time, Chongyun, too, was pulled in to serve as an umpire, their laughter filling the streets. The poems born from these sessions would also be recorded by bystanders.

“If ever you should hear a pair of matched verses, one strict and the other playful, you are most likely to have heard one created jointly by Hu Tao and Xingqiu.”
— Hu Tao's Character Story 5

In Moonchase festival cutscene, Hu Tao, Xiangling, Xinyan, Chongyun, and Xingqiu were seen playing together in a flashback as children, implying they may have been friends when they were younger. Hu Tao, Xingqiu, Xiangling, and Chongyun, were also featured on Hu Tao's first event banner, Moment of Bloom 2021-03-02, which has been interpeted as another sign of their friendship.

“I hear master Xingqiu is writing a book? Standard novella, or a ghost story? I think I should go tell him about all the things I run into — that'd make for a really good read!”
— Hu Tao's voiceline about Xingqiu

“Ah yes, the young lady who is now the Director of the Wangsheng Funeral Parlor. If you're asking what I think about her as a person... Well, there are all sorts of rumors about the way she works. But I think if you really want to understand someone, you need to find out what they are really after.”
— Xingqiu's Voiceline about Hu Tao

Xingtao is one of Xingqiu's most popular ships after Xingyun. This ship sailed due to them initially being inseparable in gameplay, and them having poetic spars as her character story 5 reveals, or as fans like to call it 'rap battles'. Moreover, their poetry battles would make a fun rivals to lovers set up. Some people also prefer this ship over Xingyun due to Chongyun having a problem with both of them, and they both prank Chongyun, hence making this ship the ultimate prankster power couple. Fans like to call them "Chongyun's Worst Nightmare" Their designs are also very similar, both having bell sleeves and shorts. Its also seems that Xingqiu likes Hu Tao more than most people do. When Hu Tao was released, Xingqiu was one of the only characters (alongside Xiao) who did not complain about her in their voicelines, and although that has now changed with Yanfei, Shenhe, and Yun Jin's releases, she remains disliked among Liyue's general citizenry.

Fans also like their dynamic due to their conflicting personalities and elements, like Xingqiu's high reputation vs Hu Tao's disregard for it in general. Also Hu tao seems like 'All play and no work' on first impression and Xingqiu comes off as "All work and no play", despite the fact if anything that's the opposite of the truth since Hu Tao's life is practically centered around her job, while Xingqiu centers his life around everything but his guild- justice, reading, adventure, martial arts, etc. And yet despite every difference they share they're still close friends and work together. 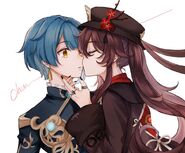 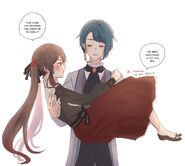