“I never embark on a journey without a good book to accompany me.”
— Xingqiu's Voiceline about Chat: Literature[src]

Xingqiu x Books is the cargo ship between Xingqiu and books from the Genshin Impact fandom.

Xingqiu is an avid reader and spends most of his time looking for rare books at Wanwen Bookhouse. He has a rich collection of books at home, from martial arts novels, to rare literature and even ancient texts. When he is not preoccupied with his duties, he writes his own books from time to time, with "A Legend of Sword" being one of his books. Xingqiu likes to protect his books from rain and food crumbs. He likes to spend time in solitude to read his books in peace.

The Traveler and Paimon travel to Wanwen Bookhouse in Liyue Harbor in hopes of purchasing the Liyue volume of Tevyat Travel Guide and talk to Jifang about its whereabouts. The conversation is interrupted by Xingqiu. As a fan of the Legend of the Shattered Halberd series, he has spent three years looking for its final volume. Concluding that Chang the Ninth may have it in his collection, Xingqiu suggests he and the Traveler visit him together.

At Chang the Ninth's residence, the trio learns that his mining business has recently gone south. To pay off his debts, he pawned off most of his book collection, including the Liyue volume of the Teyvat Travel Guide. Much to Xingqiu's delight, the sixth volume of the Legend of the Shattered Halberd remains in Chang's collection, due to its value and rarity. After Xingqiu stood up for Chang, Chang agrees to lend him the volume of Legend of the Shattered Halberd. Xingqiu subsequently leaves after obtaining what he was searching for. After leaving Chang's residence, the Traveler and Paimon find Xingqiu still in Qingce Village, deeply engrossed in his new book. Worried and suspicious that the Fatui are somehow involved, Xingqiu instructs the Traveler and Paimon to investigate Gentry, starting with his residence in Liyue Harbor, while he remains behind to finish reading the book.

When Paimon accuses Xingqiu of slacking off just because he wants to read his book, he just tries to dodge the question and change the subject. Paimon even calls him "Guhua Geek" due to his love of books.

Xingqiu once wrote a martial arts novel named "A Legend of Sword" based on his own experiences, intending to publish it in Liyue Harbor. To his surprise, his manuscript was rejected by local publishing houses, who believed that no one would have any interest in a story with "a setting as wildly unrealistic as the plot is banal." Undeterred, Xingqiu had a few copies printed privately, and sneakily placed them on the shelves of Wanwen Bookhouse during one of his many trips there. But just as the publishers had suspected, it failed to garner much interest from readers. This was quite a blow to Xingqiu's confidence. Unbeknownst to him, however, a passing merchant from Inazuma did purchase a copy to bring home, where it received rave reviews. Writers the region over attempted to copy the success of "A Legend of Sword," but none succeeded — it maintains permanent residency in the number one bestseller spot to this day.

According to Xingqiu's character story 2, one day his older brother found that his room was messy, so he cleaned it up. During cleaning he found a stash of books under Xingqiu's bed. He assumed they were adult novels, but in reality they were actually Martial Arts novels that Xingqiu loves to read. Afterwards, expecting that one of the maids would have something to say about the stash of martial arts novels under his bed, he had long since prepared his response, but in the end, no one ever bothered to check his room again.

In Xingqiu's teapot dialougue, he writes a book featuring the Traveller in it, and wants their honest critique of his book. The traveller notices he has put his heart in writing it. Xingqiu also highlights any particularly enthralling passages he encounters in the books he reads and shares them with Traveller. During treasure hunting, he wants to find long lost literature.

During the Interlude Archon Quest 'The Crane Returns on the Wild', Xingqiu helps the Traveller and Shenhe find the location of Sunset Vermiliionite by cross-referencing a stack of folk history books which made oblique references to a lost abode. He tells the Traveller that according to "Records of Drifting Clouds," Sea Gazer once built an abode to store his rarest and most exquisite treasures.

During Moonchase Festival, Xingqiu goes into the Feiyun Commerce Guild warehouse after helping Keqing and Xiangling find information about the Stove God. Since his friend Chongyun is also there, he invites him into the warehouse asking him to read a book out loud for him. When Chongyun asks him if this is why he invited him Xingqiu takes this as Chongyun not wanting to read books. So he uses this opportunity to read books again. The books he wants to read are 'A Guide to Getting Ahead in Yujing Terrace' and 'Young And Hopelessly Smitten', which Chongyun does not want to read, or be read to. This could possibly imply two of Xingqiu's tastes in books, romance books (or as quoted by Chongyun 'frivolous' books) and economic success guides. According to his voicelines he can read "anything and everything", so this dialogue just reveals two genres of his vast and varied collection.

Some time before the Irodori festival, the Yae Publishing House had requested autographs of authors so they could be put on display. Xingqiu practiced tirelessly for an entire day to deliver a stylish and elegant signature for the event, just for the sake of his pride. During Irodori Festival, Onodera explains that for the festival, he came up with the idea of selling newly released novels signed by the authors. However, he did not notify the authors in advance, and Xingqiu, being poorly versed in calligraphy, did not have enough time to improve his. As a result, he came to Inazuma earlier to practice, but even then, the two realized they did not have enough time.

“Evidently, my hobby is reading. I'll read anything and everything. ...What's that mischievous grin for? Oh. That's between the two of us, okay? It's not appropriate to discuss it out loud. There's no point in bringing it up anyway"”
— Xingqiu's Voiceline about Xingqiu's Hobbies

“Oh my goodness... Oh my gosh... Wow— Huh? "All will be revealed in the next volume"? Aw, drat...”
— Chat: Reading[src]
“If my calculations are correct, Wanwen Bookhouse is due to receive a batch of new releases today. Might we add a small detour to our adventure?”
— Chat: New Books[src]
“Good, the rain has stopped. Any longer and my books would have gotten wet.”
— After the Rain[src]
“I am uninclined to eat a heavy meal this luncheon, but instead indulge in some baked treats. As long as I eat in the study, my father and brother never have to know! Oh, you want to join me? Well... As long as you don't get crumbs on the books, I suppose it's fine.”
— Good Afternoon[src]
“There aren't many records on matters concerning Visions, but I do have a passage dedicated to the topic in my collection of ancient texts. I can lend it to you if you want.”
— About the Vision: Ancient Books[src]

In most fanarts featuring Xingqiu, he is seen reading a book, or holding one. This ship is overall small due to the fact most cargo ships in the fandom aren't popular. It gets overshadowed by Xingyun and Xingtao, his popular ships. However this ship has a lot of in-game content. We've got Xingqiu talking about books, spending majority of his time in the Wanwen Bookhouse, writing novels, etc. He even reads books when hanging out with friends, even if those friends don't like his books. Fans of this ship like to think that his novel selling well in Inazuma indicates that his affection is reciprocated. 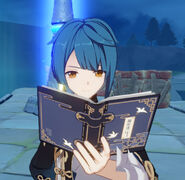 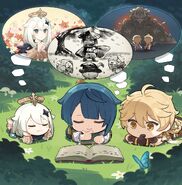 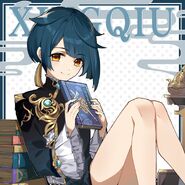 Xingqiu holding a book in his 2020 Birthday art