Acquaintances/working partners; respect on Ayato’s side

YaeYato is the het ship between Kamisato Ayato and Yae Miko from the Genshin Impact fandom.

Ayato and Yae are canonically working partners. They both focused on work based on the cultural aspects of Inazuma. Yae has mentioned Kamisato Ayato's involvement during exposing the Tenryou Commission schemes. The pairing truly began to see its worth during the Irodori Festival Event Quest, where Yae and Ayato are the masterminds behind the festivals true events.

In Yae Miko’s voiceline about Ayato, Yae calls him a Yashiro rascal . Yae mentions he is unpredictable, even from a young age. She goes on to say not to trust his “warm smile”, as there’s no way to know what he’s scheming. The Traveler proceeds to tease Yae by saying “sly as a fox”. Doing so because there are clear similarities between the two personalities. She reacts by saying that if we’re implying they’re anything alike, they’re solely mistaken.

Ayato’s voiceline about Yae Miko is a bit different. He acknowledges that Yae Miko will call him a Yashiro rascal. Despite this, Ayato says they’re working relationship is “harmonious”. Ayato mentions that working with intelligent people (referring to Yae Miko) makes things “highly effective”. In the voiceline, he calls her ideas “weird and wonderful”, and that without him, there would be no one to help her execute them.

“ Lady Guuji has been kind to us in the Kamisato Clan, but she has never quite taken to me personally. I trust you'll have heard the way she refers to me... "the Yashiro rascal" and other such flattering monikers. We run into each other semi-regularly, given the overlap in our work, and despite whatever private thoughts we each may have, our working relationship is quite a harmonious one. I have no great objection to this state of affairs — working with intelligent people always makes things highly efficient. In any case... However objectionable she might find me, she would be forced to admit that without me, she would have no one to help execute her weird and wonderful ideas.”
— Kamisato Ayato's voiceline about Yae Miko

“The Yashiro rascal... he's always been an unpredictable one, even as a child. Don't be taken in by his warm smile. There's no knowing what devious scheme might be brewing inside his head — it's really quite maddening... What do you mean, "sly as a fox"? Hmph, if you're trying to insinuate that he and I are anything alike, you are sorely mistaken.”
— Yae Miko's voiceline about Kamisato Ayato

In Yae Miko Character Story 5[1], Yae Miko has saved the Kamisato Clan during the decades long, maybe a century long, political turmoil called the Raiden Gokaden. Her story stated that even though Yae Miko should have left the political in the hands of mortals and be left with the Kamisato Clan be replaced with another one. Yae Miko intervened and saved the clan from being extinct. This, in return made the Kamisato Clan be forever loyal to the Raiden Shogun and Yae Miko's words became their lifelong decree. There are also some rumors that Yae Miko and the Clan Head had secret talks after the Raiden Gokaden turmoil died down. Though this could likely be Ayato's father as well, though the chances of it being Ayato is not farfetched as Ayaka mentioned that Ayato is the one that solved the clan's decades long troublesome event[2]. As well that the Raiden Gokaden event truly end after Ayato has claimed the title of clan head.

Yae Miko has been a character who is laced with curiosity, especially towards mortal humans as she likes to understand them like the pages of a light novel[3]. As Yae Miko understands something or someone, she can 'control'. Though this is not the case for Ayato as his personality, motives and intentions baffles even for the likes of the sly Guuji Yae. Ayato is the only person as of now, that Yae can't understand and that leads her to feel frustrated about him. Hence, Yae feels that Ayato as whole is enigmatic to her and it led her to feel it to be quite maddening. Fans often argued that this shows a sort of hatred towards him when it is simply false.[4]

Ayato is seen as a distrustful person and he only have a handful of people he can trust. Though with that in mind, Yae has borrowed Sayu, Ayato's shuumatsuban member, to assist the traveler on infiltrating the Tenryou Commission. It would take a high amount of trust for Ayato to lend her a member of highly secretive ninja organization. This also shows the loyalty Ayato have for Yae Miko's promise and the nation of Inazuma under the Shogun's rule and believed that the Raiden Shogun will change her nation for the better.

A popular headcanon amongst Yaeyato shippers is that the Ayato and Yae Miko has some parallel qualities to Saiguu and Harunosuke. Harunosuke is a man who built a domain to train humans as a way to protect Inazuma from threats in honor of his promise to protect Kitsune Saiguu and her descendants. Ayato is also parallel to Harunosuke resolve to be loyal towards the Raiden Shogun's path to Eternity in honor of his promise towards Yae Miko as a grateful gesture for saving his clan. Harunosuke is described as a playful and easygoing man by Kitsune Saiguu, much like how Ayato is currently portrayed. 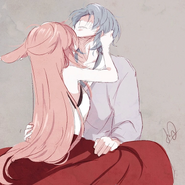 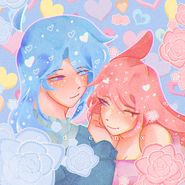