“I-I'm pretty confident when it comes to being nervous!”
— Yachi to Yamaguchi

YamaYachi is the het ship between Yamaguchi Tadashi and Yachi Hitoka from the Haikyu!! fandom.

Yamaguchi and Yachi are both first-years. They are also part of Karasuno High Boys' Volleyball club with Yamaguchi as a middle blocker and pinch server and Yachi as one of the managers. They are both good friends, who get along well and are relatable to each other. They share many common traits such as the fact that they are both quiet, they both get incredibly anxious at times, and they both have a friend that they look up to and always follow around. Based on some scenes, Yamaguchi might have a small crush on Yachi as he is seen blushing around her, but it is never mentioned, as the show tends to focus more on volleyball and teamwork and individual character growth than romance, and also the fact that he's almost always hanging out with Tsukishima.

Yamaguchi first sees Yachi when she arrives to practice, alongside Shimizu, as a trial for being a potential manager of the club. Yamaguchi notices Yachi and thinks of her as being ‘cute’. He is also seen slightly blushing at the time. Yachi, on the other hand, is terrified of all the boys trying to talk to her. At first, he is shy around her, but the two start to get closer over the series.

Prior to the rematch against Aoba Johsai, Yachi offers helpful advice to Yamaguchi on how to handle his anxiety. She suggests saying the things that he's nervous about out loud. But when he tells her about what happened last time with his serve, he makes her very anxious. This makes Yamaguchi worried for Yachi’s wellbeing when she says she feels like throwing up, leading him to try to find and offer medical assistance. Later, when Yamaguchi succeeds with his jump float serve in the game, Yachi is seen brimming with pride.

In the light novel series, Yachi mentions how she never realized how tall Yamaguchi was.

In one of the manga's bonus chapters, Yachi is feeling insecure about her looks and Yamaguchi tells her that beauty is different for everyone. This cheers her up and prompts Takeda to say that out of the team, Yamaguchi will be the one with the least trouble finding a girlfriend.

YamaYachi's ship is seen as fluffy and healthy, with both characters being happy and comfortable around each other, as seen when Yamaguchi is usually blushing at Yachi, who does the same in return. Some fans view their relationship to be better as close friends, rather than a couple. Although they're not shipped as much as TsukkiYama and KiyoYachi, or in most cases, HinaYachi and YamaHina, YamaYachi is still popular amongst a lot of Haikyuu fans, although being underrated and rarely discussed. There has recently been a discussion on the time-skip official art, where it is to be said Yamaguchi and Yachi are seen to be wearing rings on opposite hands, possibly signalling a relationship of some sort, but it was a mistake due to poor image quality. YamaYachi currently has 709+ works on AO3. 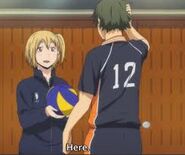