View source
watch 02:56
Doctor Strange in The Multiverse o Madness - The Loop
Do you like this video?
Play Sound
WOAH! THAT'S ONE SMALL SHIP!
• THIS ARTICLE IS A STUB. YOU CAN HELP BY EXPANDING IT •
Stub pages are deleted after 4 months. If not filled out enough, Yamaceles will be deleted on
7/31/22

Former Classmates/Somewhat Master-Servant; both are dead

Yamaceles is the het ship between Hifumi Yamada and Celestia Ludenberg from the Danganronpa fandom.

Hifumi regards Celestia highly, even referring to her as "Mistress", and following every one of her orders. Despite the fact the first major interaction seen between the two resulted in Celestia smashing a cup of tea in anger and berating Hifumi harshly for preparing it incorrectly.

He seems to be extremely protective over Celestia (or just has a strong sense of justice) as shown after she lies to him about being assaulted by Kiyotaka Ishimaru, he is willing to kill Kiyotaka for such a thing.

During his last moments of life, after being asked by Aoi Asahina about who attacked him, Hifumi begins saying "Yasuhiro...". It's later revealed during the Class Trial that he meant Celestia's true name - Taeko Yasuhiro. Since the head trauma from the injury caused him to regain his lost memories right before his death, this means that at some point during their time at Hope's Peak Academy before the Killing School Life, Celestia told Hifumi her real full name, which she kept secret from everyone.

Shortly after Hifumi and Celestia's deaths, Makoto Naegi along with the remaining students discover a picture of Hifumi, Celestia, and Sayaka Maizono at Hope's Peak Academy before the Killing School Life and The Tragedy began. In the picture Celestia is angrily holding onto Hifumi for stealing her fake eyelashes as Sayaka laughs. However, it doesn't seem to be any sort of threatening anger, and Hifumi seems more amused than afraid. This could indicate their previous relationship was a more friendly one, and not the cruel bullying one they have in Killing School Life.

In many pieces of official art, Celestia is shown to be sitting on top of Hifumi, literally using him as a chair, solidifying their relationship as him simply being used.

The ship sailed as a result of the two having their most important interactions with each other. It received mixed feedback. Celestia using Hifumi like a servant was enough to put off some fans. A lot of fans abandoned the ship after Celestia tricked Hifumi to kill Kiyotaka and then killed him. Nonetheless, the ship still has a big following. One of its sweetest aspects is considered to be Celestia revealing her true name to Hifumi back during their school years, as she kept it a secret from everyone. 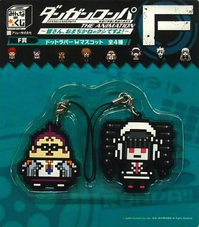