YanTao is the femslash ship between Yanfei and Hu Tao from the Genshin Impact fandom.

The two currently do not interact in the game story or events. Although, Yanfei knows about the director through her voicelines. Additionally, In Yanfei's voice line about Hu Tao, Yanfei approves of Hu Tao and her business against the people in Liyue calling her weird stating that her job isn't lucky or unlucky, just a job that needs doing. Yanfei is one of the few people who does not have a negative view on the director.

In Yanfei's voice line about Hu Tao, she mentions how the people of Liyue call Hu Tao's way of business unusual and that they see Hu Tao as mentally unwell due to how long she has been in the funeral business. After all, Hu Tao took control of the funeral business when she was young, after her grandfather passed. Yanfei expresses she feels they don't know what they're talking about, as the funeral business is legitimate and necessary in any society. Stated earlier, she mentions her only issue with her which is that Hu Tao's place rarely comes to Yanfei for legal advice.

Both of their birthdays are in the month of July. The two are also both pyro characters, with Hu Tao being a polearm user, and Yanfei being a catalyst user. It is unknown if Hu Tao is aware that Yanfei is half mortal and half adeptus. The two share some similarities with their design, with both having bangs and a hat.

“I always hear people saying that the director of the Wangsheng Funeral Parlor has an unorthodox approach to business. They think she's gone a little non compos mentis after being in the funeral business so long... What are these people talking about? The Wangsheng Funeral Parlor provides a legitimate and necessary service, which is the cornerstone of any successful enterprise. Work is just work — there are no good and bad jobs, or lucky and unlucky jobs, just jobs that need doing. If I had one gripe, it would be that the director rarely comes to me for legal advice, hmph...”
— Yanfei about Hu Tao

Shipping between these came after the release of Yanfei. This ship started to make more sense after Yanfei's voicelines about Hu Tao, in which she complains about how she rarely asks for legal advice, stating that Yanfei wishes to engage business affairs with Hu Tao. Some fans of this ship like to compare to the two to another popular femslash from a different fandom, Bubbline. The popularity of this ship is increasing due to their resemblance of the pairing above, and this ship is mainly popular on the platform Twitter. YanTao is also one of the more popular ships in Genshin Impact in which one of the main suppliment being Genshin Fandom highly prefers slash ship over het pairings.

One of the reasons YanTao shippers ship these two is because Yanfei does not state negatively of Hu Tao, while majority of the Liyue cast does. This makes the ship stronger to the fandom as they find this pairing very valid. This is one of the few more famous ships in Genshin Impact where they have not or barely knowing with each other. This ship currently has 500+ fanfictions on Archive of Our Own; it is both Hu Tao's and Yanfei's most written ship. The ship has a few rival ships, such as HuXiao and ZhongTao.

People who don't ship YanTao romantically can also ship them as friends or family as they seem to have a good synergy aesthetic-wise. They are very similar in appearances and can be seen or portrayed as sisters instead of lovers. In gameplay, Yanfei and Hu Tao are areliable duo since they enable the Pyro Resonance, along with Yanfei's constellation 4 activating a shield, which is helpful for Hu Tao's battle mechanics. Overall, the fandom created this ship primarily due to their personalities and similar appearance and the fact that they have a lot of potential as a couple/family and due to their regards and attention of femslash pairings. Noticeably, this is one of the few ships with over 500 fanfictions in Genshin Impact, making it the more well known ship of both sides. 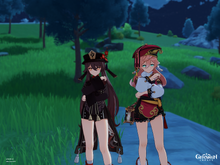 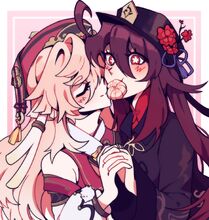