Yoimiya x Fireworks is the cargo ship between Naganohara Yoimiya and Fireworks from the Genshin Impact fandom.

As shown, Yoimiya is the owner of the Naganohara Fireworks, she's a talented pyrotechnician. During her first fiesta, she has earned the title, "Queen of the Summer Festival" from it. As her first fiesta was seemingly jaw-droppingly good. Yoimiya tends to play with fireworks a lot, even her idle animation has her playing with a small firework. As well her gameplay includes fireworks, seemingly dedicated to it.

In Yoimiya's Story about Vision, it states that at first, Yoimiya used her vision as a sort of lighter (or flint as mentioned in her voiceline about visions) to use it on fireworks. Fortunately, her father told her the significance of the vision, it mentions that Yoimiya has grown ever more skilled in of "fire" and her skills at making fireworks as time flew.

In Act 1, when Yoimiya and the Traveler is trying to save Master Masakatsu. Yoimiya decides to make a little distraction as she accidentally made a noise while trying to hide, which is by using her fireworks on the guards as the little distraction. She starts using the fireworks. Fortunately, it was successful, however, as the Traveler congratulates Yoimiya. Yoimiya tells the Traveler that she was proud of the batch and so more fireworks started launching. Paimon states Yoimiya that the fireworks are turning into a firework display, Yoimiya answers her, stating that every fireworks has to be spectacular.

In Act 3, the Traveler goes to Yoimiya again, asking her for her to make an extra-large firework for the distraction to get the proof. Yoimiya giggles as they came to the right person, but Yoimiya warns the Traveler to cover their ears and don't get too close to it because the firework is loud and still hasn't been tested. Then she gives the firework to the Traveler.

After the Fireworks Show, Yoimiya states that the Fireworks Show was so amazing that she could weep. Later onto the conversation, Paimon tells Yoimiya that she seemed a completely different person when she watched the fireworks as she was very silent. But Yoimiya replied to her, saying it's a habit of hers. Before Carassius Auratus ended, Yoimiya says that she's proud that she was born into the Naganohara family. And, to have the chance to create many pretty fireworks.

“Fireworks are for now, but friends are forever.”
— Yoimiya's Voiceline about Chat: Fireworks

“The loveliest fireworks go along with the most wondrous moments. Tiny little emotions that can easily slip away are captured within these fireworks and passed down in a different form. The notes we give our clients are like a key that awaits those who wish to open a gate to commemorate the past. We at Naganohara are the keepers of that gate.”
— Yoimiya's Voiceline: More About Yoimiya: III

“I shan't tell the final tale, I think. Instead, let's watch the fireworks together in silence. You can record the beautiful scenery and all the things you wanna say down. Not that this is the end, of course. On the contrary, I believe that our story is only just beginning.”
— Yoimiya's Voiceline: More About Yoimiya: V

“Fireworks! Wait, that doesn't count? Well then, let me think. Um... This one's a toughie. I like to chat with the neighbors, I like going to summer festivals with the children, swimming, picking wild fruits... Oh, I can't decide which I like most... Wait, I've got it! I love playing with everyone!”
— Yoimiya's Voiceline about Hobbies: Playing

“I like fireworks because creating incredible fireworks makes me feel so proud of my work.”
— Yoimiya about Fireworks in the Serenitea Pot

Yoimiya x Fireworks isn't generally known as a ship. But despite that, due to Yoimiya being known for the use of the fireworks, and since she always uses it and talks about it. There are people who jokingly ships Yoimiya with fireworks within the Genshin Impact fandom. It gets overshadowed by Ayamiya predictably. Artworks illustrates Yoimiya, playing with her fireworks. 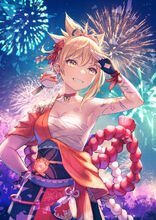 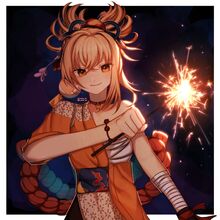 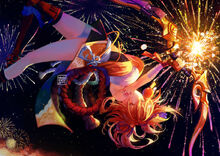 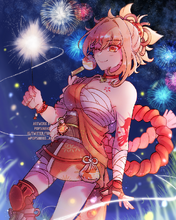 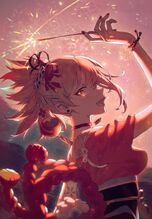