Best Friends/Classmates; Admiration on Himiko's side; Angie is dead

Yonameno is the femslash ship between Angie Yonaga and Himiko Yumeno from the Danganronpa fandom.

Though appearing uninterested and lazy at first, making comments about how Atua is "suspicious", and is off put by Angie's cheerful personality, Himiko quickly becomes close friends with Angie in Chapter 2 and converting into her religion to worship Atua, which she believes assists her, and stated by Angie, a very "handsome god". This makes Tenko Chabashira upset and very jealous with how close they've become, overprotective of Himiko and disliking Angie. Angie describes Himiko as a "good girl and fast learner".

However, the other students, mostly Tenko, are disturbed by their bond, which appears to be a result of brainwashing. They all believe that Himiko goes with what Angie says rather easily, despite being near-exact opposites. Shuichi even makes a comment before Himiko performs her magic trick, pointing out that she doesn't go along with Angie's jokes, as usual, being so nervous to perform.

Himiko is shown to trust and like Angie very much, and Angie even assists Himiko with making a magic show the show off her talent, which was Angie's idea. Unfortunately, the show is quickly jeopardized by Ryoma's murder.

Despite their bond, Angie goes to immediately accuse Himiko of being Ryoma's killer when there was evidence that showed Himiko was capable of being the killer. When Tenko asks her why she's so quick to throw her friend under the bus, Angie states casually that she only needed to do so because she didn't want her classmates to die due to choosing the wrong culprit, especially seeing as Himiko was most suspicious at the time. Himiko doesn't blame Angie for this, as she is extremely trusting of her and Atua's logic, which baffles Tenko greatly.

Because of how suspicious and unsettling Angie is with the others, including her bond with Himiko, Tenko later joins her Student Council to be with Himiko and protect her, and later betrays Angie by going to Maki and Shuichi for help.

When Angie and Tenko are killed the next day by Korekiyo, Himiko is devastated by this, only able to mourn their deaths during the investigation. She actively participates in their Class Trial, determined to solve their murders and find their killer.

After Korekiyo is confirmed to be the killer of both Angie and Tenko, she's infuriated, demanding to know why he did it. After he explains he killed the two girls for his sister, she's confused but no less angry.

After his execution, she's pushed by Kokichi to stop bottling up her feelings. She starts sobbing in the trial room, crying about how lonely she is without Angie and Tenko.[1]

The ship sailed as a result of the friendship between Angie and Himiko, which caused Tenko to be jealous. Tenko and Angie appeared to fight over Himiko. As such, its main ship rival is Tenmiko, although some fans ship the entire trio together in a polyship called Traffic Lights.

The ship received mixed feedback. Some prefer it over Tenko's obsessive crush on Himiko. Some prefer Himiko's ship with Tenko and are not fond of this ship. Some accuse Angie of brainwashing Himiko and getting her into troubles in the trials, for example by coming up with the idea for Himiko's magic show, which ends up being part of the crime scene. Angie betraying Himiko during the trial suspecting her and emotionally manipulating her didn't help endear the fans either. 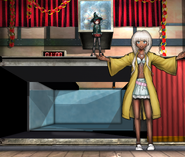 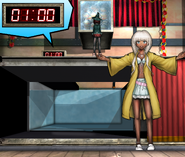 Traffic Lights refers to the ship between the two and Tenko Chabashira.