Yumary is the femslash ship between Yumeko Jabami and Mary Saotome from the Kakegurui fandom.

Yumeko and Mary are classmates. At first, both had a rivalry, but after a while, both showed respect and trust for one another.

On Yumeko's first day at her new school, Mary was jealous of all the attention that Yumeko was getting, so challenged her to a gambling game. It was a game of rock, paper, scissors that they bet money on. At first, Mary underestimated Yumeko and managed to win, but when Yumeko's chips ended, she bet 8.8 million yen. Mary seems hesitant at first, but Yumeko teases her by saying that she is chickening out, making Mary accept the bet. Despite Mary's continued cheating, she ends up losing the game and being in debt to Yumeko anyway.

The next day, when Yumeko arrived at school, Mary is being humiliated for becoming a Mittens because of her debt to Yumeko, appearing to blame her for it.

Later, Yumeko is called by one of the members of the Student Council to place a bet, but when she arrives there was already an official match taking place. It was between one of the Student Council members and Mary. Mary ends up losing the bet though and gets very angry, appearing to be spiteful and blaming Yumeko because she only entered this game to try and get the money to pay off her debt to Yumeko. Yumeko also lost the bet with the guild member, building up an even bigger debt than Mary's.

When the student union make a game to help students with problems about their debts, Yumeko and Mary end up having to work together. Mary is extremely frustrated with this, but Yumeko is very excited. Yumeko and Mary have great chemistry in the game and are a devastating betting team. They changed the value of their chips, with Mary first and Yumeko third, and both seemed to have great respect for each other during the game.

After the game, Ryota receives the money from the bet that Yumeko won, then Yumeko and Mary explain to him. After that, Mary was leaving when Yumeko hugs her, saying thanks to her for letter her have such an enjoyable game with her. Mary blushes and says that she thinks this is true for both of them. Then she tells Yumeko to release her though, complaining that Yumeko is pushing on her breasts. Yumeko takes Mary's hand, asking her if they are now friends and if she can now start calling her by her first name. Mary blushes again and says she thinks so, making Yumeko hug her again.

After Mary pays her debts, she decides to ask Ryota why Yumeko hasn't paid her debts yet. Yumeko plans to have another official match. After a while, Yumeko tells Mary that she doesn't feel right about keeping all of the money herself because they both got it all together. Mary yells at her, saying that she doesn't want to be in debt to her anymore. Later, Yumeko and Mary have lunch together, along with Ryota and Itsuki.

When Yumeko decided to place a bet with the president of the student union, she appeared to be concerned. Mary and Itsuki suggest to Yumeko that she cheat, but Yumeko refuses. Mary does not seem surprised, saying that this was her face. When the game ends in a draw, the president tells Yumeko that things will be a lot of fun. Yumeko denies that she is one of her subjects, but her friend, along with Mary.

After Yumeko received the three billion yen bet from Manyuda, she says she was excited to use the money to bet with other people, but because of the guild elections, she couldn't. So Mary goes to Yumeko, telling her to stop playing. She shouldn't show off as that may end up getting the attention of an idiot. Yumeko tried to hug Mary, but Mary stops her before she can.

When Yumeko and Ryota went to bet on Miyo and Miri, she ends up being poisoned by Miyo. Yumeko asks Ryota to call Mary. Miyo and Miri say that they will give them the antidote if they win the game. Mary accepts, but looks very angry. After Mary and Ryota win the game, they take Yumeko to the infirmary and Ryota tells Mary that it was Yumeko who told him to call Mary. She is surprised and believes that there is no one like Yumeko. After Ryota leaves, Mary remains in the infirmary with Yumeko who is still asleep. Mary moved their faces close together and tells her that she will be the president of the student union.

Later, the people with the most votes in the elections are called to a vote auction, including Yumeko who is in tenth place and Mary who is in fourth. When Yumeko arrives, she finds Mary. She tries to hug her and again Mary stops her. You can see how the relationship between Mary and Yumeko developed over the course of the anime. Mary is one of the few people who can understand Yumeko and respect her by recognizing her skill and intelligence as a gambler.

While canonically the franchise avoids any romance, except occasionally between side characters, it is extremely friendly-yuri baiting in nature. Along with the illustrator's yuri past, a lot of attention has been drawn to this and this yuri ship in particular. While other franchises with a similar reputation try to make it ambiguous or at least less provocative, the manga, and especially the anime adaptation of Kakegurui, takes it almost to a self-parody style, only cementing the show's memetic popularity.

For several reasons, such as the lead status of both girls and their popularity, this ship has always bypassed both het and other femslash ships in the franchise in popularity. This was noticed by the author. E.G. Th, the official manga anthology is almost directly devoted to this ship, even openly playing on the popular elements of shipper's fanon about I.E. Many authors in the anthology echoed the popular among fans motif of yuri-teasing from Yumeko and tsundere's responses from Mary.

It also influenced the further development of the plot and subsequent adaptations of the franchise, especially its formal protagonist Suzui. While the manga began to remove him from the plot at times or turn his ship tease with Yumeko and/or Mary into a threesome/poly subtext, live-action adaptations began to change his personality and give him greater importance to the plot to better justify him being in the plot.

A popular rival ship to Yumary is Marika, the ship between Mary and Ririka. 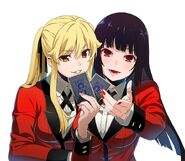 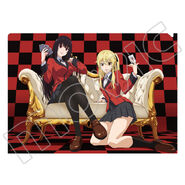 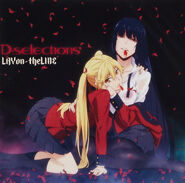 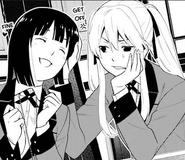 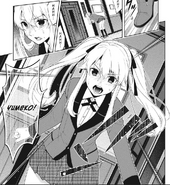 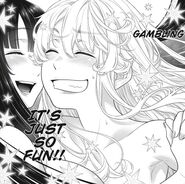 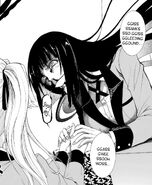