• Birds of a Feather
• Opposites Attract

YunYan is the femslash ship between Yun Jin and Xinyan from the Genshin Impact fandom.

Xinyan grew up deeply impacted by some prejudices of her looks, since she was viewed as less feminine. Yet becoming a rock 'n' roll star has not caused her to give up on these other arts. This is not only because she hates losing, but because she feels that "giving up because you have no talent" is itself a prejudiced belief. Yun Jin is a fan of Xinyan who was invited to her place as a guest. After entering the house, Yun Jin was amazed by how clean Xinyan's house was. Xinyan was quite worried that this fan of hers would find the difference between their impression of "rock 'n' roll" and this reality too jarring. Unexpectedly, Yun Jin's support and fandom would only grow more intense after this.

Yun Jin is described as someone who enjoys variey, so she is particularly fond of rock 'n' roll, visiting Xinyan and watching her performances at least three times a week no matter how busy she is. Xinyan believes that she comes to visit her due to the finer arts being "suffocating". She tries to keep her visits a secret, as her interest in non-traditional music would cause much consternation among her elders. Many veterans of the Yun-Han Opera Troupe dislike other types of music performance, including rock 'n' roll. Yun Jin, however, thinks otherwise. She finds that rock 'n' roll vibrates with vigor. The elders are not fond of the rock star Xinyan, but Yun Jin still visits her. She even created a imaginary friend called "Xingyan" , who the elders seem to respect, to visit her friend.

Just like was described in their character stories, Yun Jin says that her elders are always harping about rock 'n' roll being a bad influence and they never approve of Yun Jin going to Xinyan's shows. She says that's because they don't accept anything new, but she doesn't care, and will continue to "keep rocking out at Xinyan's gigs every week." Xinyan's voicelines about Yun Jin states that she's real fond of rock and that is a secret between her and the traveler. Xinyan says that Yun Jin comes to watch her at least three times a week no matter how packed her schedule is. She tells the traveler that it's expected to that to happen since it gets suffocating after a while being into finer arts as the head of Heyu Tea House's troupe.

The World of Opera: A Behind the Scenes Look at the Creation of Yun Jin

Dou, one of the members of the Creative Concept and Writing Team of Genshin Impact, said that a character who has a deep connection to Yun Jin is Xinyan, an artiste who loves rock 'n' roll and an opera performer — if there is a connection between these two characters — and that they think it's quite an interesting collision. In his words, "This collision is not a matter of competition or debate but a relationship of mutual appreciation. Although Yun Jin is a traditional opera performer, that doesn't mean she only focuses on what's relevant to her work itself. She is still very open-minded and is a person that appreciates new things. In her mind, she believes that being exposed to more and newer things is a good thing as it helps to broaden one's horizons and absorb fresh knowledge and new cultures. Through this collision and learning process, her own performance and knowledge will be more complete."

“The elders of the troupe are always harping on about rock 'n' roll being a bad influence. Needless to say, they never approve of me going to see Xinyan's shows. "It's for your own good," they say. Hmph, all it's really about is their inability to accept anything new. Whatever, those old fogies can't tell me what to do. I'm going to keep rocking out at Xinyan's gigs, every week, and that's that.”
— Yun Jin's voiceline about Xinyan

“Tell you a secret — but you gotta keep it that way, you hear? She's real fond of rock 'n' roll. Comes to watch me at least three times a week no matter how packed her schedule is. You'd think that the head of Heyu Tea House's troupe would be into finer arts and all, eh? But I guess it gets suffocating after a while. Haha.”
— Xinyan's voiceline about Yun Jin

Yunyan gained some attention before YunJin was even released, since Xinyan's voiceline was pretty amusing. After the new Lantern Rite Event was released with a cutscene where Xinyan and Yun Jin hold hands and watch the fireworks together, the ship grew in popularity. The ship doesn't has alot of works on AO3, but has alot of fan art. It's Xinyan's 3rd most written ship and Yun Jin's 2nd. The main rivals of this ship are ShenJin, Barbnyan and Xiangyan.

When we see Yun Jin, she's always this dignified, elegant, graceful girl, honed to perfection by generation upon generation of the yun-han opera troupe. However, in the lantern rite cutscene, she's openly smiling, giggling, laughing and jumping around without any reservations. It's a funny contrast to Xinyan, who others commonly perceive as passionate, eccentric, which can sometimes be seen negatively. but she's actually really sweet and and soft.

Yun Jin and Xinyan on the 2022 New Years Contest Poster 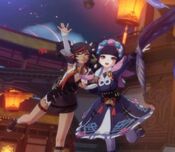