Yutamaru is the het shipping between Yuta Asahina and Komaru Naegi from the Danganronpa fandom.

It is seen that Yuta agrees to go with Komaru and Toko and tells them he'll get help from the other side of the ocean.

But he ultimately fails at the bracelet exploded killing him, much to Komaru's shock. She then refuses to believe he's dead and wanted to help him, she breaks down in tears after Toko convinced her that Yuta had died in the explosion. Komaru is seen to be very sad and also somewhat traumatized by Yuta's death.

Yutamaru is a rare-pair among the Danganronpa fandom. Due to Yuta's early death, he and Komaru didn't interact as much which contributed to the ship's non-existence. Nonetheless, there are people who do enjoy the few interactions between them. YutaMaru fans are known for having a small but nice fan-base. Many people like to image that if Yuta would have lived longer he and Komaru would have had cute interactions. In fan arts, Yuta and Komaru mostly are seen to cuddle or doing other couple like things, some fan arts also include Yutas and Komarus siblings, who are also on a date, making it a Naehina and YutaMaru double date.

The ship sailed due Komaru's and Yuta's similiar pesonalities: both are shown to be nice and caring for people. Both are also siblings of characters in the first Danganronpa game, Yuta's big sister is Aoi, while Komaru is Makoto's younger sister. In fan fictions, Yuta is often shown as the shy one, and Komaru as the one who makes the first step. There is quite a bit of fan art for YutaMaru despite it being such a minor ship. Many people like to call the ship Komahina 2, a portmanteau of Komaru's given name and Yuta's family name. A popular pairing is already named Komahina, logically adding a 2 in reference of the ship.

YutaMaru is Yuta's most popular ship, due him being a minor character though his age isn't canon it is hinted he is a minor, and interacting the most with Komaru, Komaru otherwise has a much more popular ship with Toko named Tokomaru. People who ship Yutamaru also often tend to ship Togafuka as they don't want Komaru to get in the way of Togafuka and end up shipping Yutamaru because of this, otherwise the ship is also popular among people who would like to see Komaru in a het ship. On Archive Of Our Own, the ship currently has about 11 fanfictions as of May 2021. 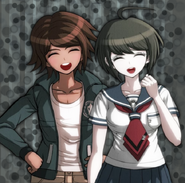