Amaya – “We'll defeat whatever evil comes, together”
Zari – “I like that”
— Closeness[1]

Zamaya is the femslash ship between Amaya and Zari from the Legends of Tomorrow fandom.

Zari meets the Legends and tricks them into helping her get her brothers totem out of an ARGUS facility. When she activates it, Amaya's totem, back on the Waverider, begins to glow. She begins to feel stress since she doesn't know what's activating the totem. When Amaya has a vision of the spirit world, which she entered in order to figure out what's wrong with her totem. The manifestation of her ancestors tells her that she must find a girl that needs her protection. Specifically a totem bearer. After waking from her trance and escaping the Time Bureau, Amaya joins Ray and Zari in fighting Kauasa.

After fighting Kuasa, Amaya thanks Nate for helping her with her totem. Nate becomes disappointed because this means that she's leaving the ship. Amaya tells him that she can't leave yet, because her fate is entwined with someone else's. Zari's. Nate informs her that they're dropping Zari off in 2042. Amaya quickly leaves him to go talk to her. Mick takes Zari back to her home, but before he leaves her, Amaya shows up, telling Zari to wait. She explains to Zari that her necklace is a totem like her own, and it links them in some way. She then offers Zari a place on the Waverider. Zari thinks that the offer is nice and weird, but is hesitant to take it. Amaya replies that totem's have possibly guided them to each other. Zari looks at Amaya, briefly thinking it over, then offers Amaya her hand. Amaya takes it, Zari officially joining the Legends.

During breakfast Amaya tells Zari that she’s glad she left 2042 to be with them, but Zari wants to talk about the possibility of going back, or 2041. Amaya looks at her shocked and hurt at the suggestion, but Zari doesn’t notice, too focused on the idea of changing history to save her family. Amaya, Stein and Sara explain that they can correct the past, but they can’t change it, because they could create changes that could damage the timeline beyond their control. Amaya enters Zari’s room, and apologizes, mistaking Zari looking for her earring, for praying. She says she wanted to talk about Zari not being allowed to save her family. She thinks that Zari should be comforted that her brother wanted her to have the wind totem and that it’s her birthright. Zari angrily tells Amaya to stop talking about her family, since she can’t save them, and her totem begins to glow. Amaya’s also begins to glow, and they connect briefly. Zari asks what that was, and Amaya explains that the reason she stayed on the Waverider instead of going back home, and that she asked Zari to stay. They’re connected and she was hoping they would be able to find out why together.

The Legends crash a party for the Order of the Shrouded compass. Amaya notices the tigers head mounted to the wall, disturbed that anyone would hunt one for sport. Zari is more concerned that they’re at a point in history where women can’t vote, and the internet doesn’t exist. When Stein’s ancestor makes an appearance, the two look at each other, remarked at the resemblance between the two. When Madame Eleanor comes in and makes the lights flicker, Zari whispers to Amaya her amusement in people buying the trick. Eleanor calls Zari to her table and makes contact with her dead brother. Zari becomes upset at what Eleanor is doing and Amaya tells her to stop. Their cover ends up getting blown and they have to fight the party guests. Post mission Zari sits in her room staring at a picture of her family, when Amaya walks in. She tells Zari that she’s concerned about her, since she thinks Eleanor channeled her brother. Zari tells Amaya about the night that A.R.G.U.S. came for her family. Instead of staying and fighting she became scared and had run away. She take off the necklace and gives it to Amaya, saying she doesn’t want it, and doesn’t care what’s going on with it. Amaya tries to remind her that it’s the only remaining connection Zari has to her brother, but Zari doesn’t see it that way. She see’s it as a reminder that she should have died instead. Amaya wants to comfort her but Zari leaves before she has a chance.

When the ship gets put on lockdown, Amaya asks where Zari is, no one on the ship realising she had gone to see Madame Eleanor. When Sara starts up the weapons on the Waverider, the team thinks she’s going to blow up the building that has Damian Dahrk in it. Amaya tells her that Zari is most likely in there. As the missiles are beginning to fire up, Amaya asks what Sara is doing since Zari is in that building, stress clear in her voice. During the fight with Damian Dahrk, Eleanor is about to use the air totem against Amaya. When Zari’s sees this she yells that the totem is hers and it flies into her hand. Amaya see’s this and smiles at Zari. The two stand next to each other after the battle looking around at the damage Dahrk and Eleanor had done. Zari is playing Mortal Combat in her room, when Amaya opens the door. Zari pauses the game and invites Amaya in. Despite thinking that she’ll sound weird, she tells Amaya that when the totem came back to her, she felt her brother’s presence with her. Amaya says that it doesn’t sound weird. She then tells Zari about how the vision she had of her ancestor told her about the totem’s become more powerful, the more powerful the threats they face are. Zari sarcastically replies with a “Fantastic”. Amaya believes what her ancestor meant was that they’ll be able to defeat the evil they face as long as their together. Zari likes that idea.

The two walk onto the bridge, Amaya asking what’s going on. They explain that Stein and Jax have swapped bodies. Zari responds simply with cool. This is pretty much Tuesday for the team. When they reach Hollywood, Amaya and Zari disguise themselves as members of the crew, and stay near each other. The two look on together as two men start a fight over Helen of Troy. After Helen gets taken away by a studio executive, Amaya runs up to Zari, asking what happened. At a party where Helen is, Zari feels pain in her leg. Amaya asks what’s wrong, Zari asks back if they can go back in time to murder whoever invented stockings. Amaya laughs at the remark, and goes to search the party for Helen. After the party, the girls head to Rotherberg’s mansion to take Helen to the Waverider. Sara gets in the front of a truck while Zari and Amaya wait in the back together.

Sara pulls up the driveway, and one of the security men head to the back to check out what the delivery is. He see’s Zari and Amaya in the back and thinks they’re prostitutes. The two are offended and Amaya punches him in the face, knocking him out. They then meet Helen and offer to take her back to Troy. She agrees after Coleson and Rotheberg start a shoot out over her. Sara tells Zari and Amaya to stop the men from killing one another. Back on the Waverider the two tell Helen that they have to leave her on the ship while they go save Hedy Lamar. Amaya informs Zari that they have to lock the doors manually, and Zari leaves to do so. As she locks the door, Kuasa enters the Waverider and begins to choke her. Amaya arrives ordering Kuasa to let Zari go. Kuasa obeys but knocks Zari out in the process.

Zari and Amaya get ready to mediate. Zari picks up the leyoga root, asking if eating it will cause the vision quest. Amaya takes it out of her hand before she eats it explaining that that much would kill her, and the tea would be enough. A mix of that and Zari's totem should be enough to search for Amaya's. The two then toast their cups and take a sip.

The two then enter the spirit realm. Zari looks around at the desolate wasteland, confused as Amaya said that it was beautiful. Amaya says it was, but somethings wrong. They walk around, Zari suggesting that they should leave, but Amaya can feel her totem everywhere, but it's different. Zari's totem then glows, and Amaya's ancestor appears. She explains how they need to get the totems back to stop Mallus. The totem then falls to Nora's power, and Zari tells Amaya they have to go, but Amaya says no. Her ancestor then disappears and the world turns dark.

“We're bound together somehow, in a way that I have yet to understand”
— Amaya[2]

Nate – “Z could you please tell Amaya that talking to Kuasa is a bad idea?”
Zari – “No”
— Daddy Darhkest

Amaya – “I think what she meant is that you and I are gonna become great friends. And we'll defeat whatever evil comes, together”
Zari – “I like that”
— Return of the Mack

“Never gonna learn how to knock are you?”
— Zari, on Amaya constantly entering her room[1]

“This whole experience has made me realize that my fate is entwined with someone else's. Zari's.”
— Amaya, deciding to stay[2]

Charlie – “Do you know why I kept coming back to this form?”
Zari – “Because Amaya is very hot?”
— Legends of To-Meow-Meow

Shippers were instantly drawn to the pairing. Many preferring the two together over Amaya with her current love interest, Nate. The connection between the two drew many shippers, as well as Amaya looking at Zari, led many to see these as instant heart eyes. 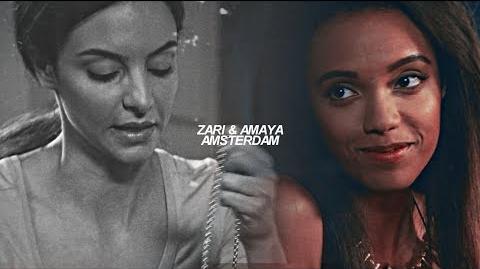 Zari & amaya - or something else.

Retrieved from "https://shipping.fandom.com/wiki/Zamaya?oldid=197049"
Community content is available under CC-BY-SA unless otherwise noted.