Zava is the femslash ship between Zari Tarazi and Ava Sharpe from the Legends of Tomorrow fandom.

A HEAR OF HER TIME

As Zari suggest to Behrad that they use the waverider to look into the future, Ava interrupts them and tells her that she's not allowed to use time travel for personal gain. She agrees and starts going through her phone, but Ava says that social media isn't allowed either. Ava thought that they were dropping Zari off, but Zari tells her that Behrad invited her to stay. Ava says okay, but to stay out of the way if there's a mission. Zari gives her a little "aye aye" as Ava leaves.

As they get ready for their mission, Ava yells at Behrad to hurry up when Zari steps out of the fabricator dressed in a 1700's outfit. She says hey as Behrad runs out and says he couldn't stop her from getting in the fabrication room. Ava says that she's not coming, but Zari insists that she can handle herself. Ava says that it's a deadly situation and she doesn't have time to keep her eye on Zari. Nate asks what the harm is, but Ava insists that it's against protocol. Zari says that it would be super cool if Ava let her come along and bats her eyes. Ava gives in as long as she stay out of the way. Zari gives a little yay and sprays Ava with some of her perfume. Ava asks why she did that, and Zari says it's to spruce up her sad outfit. She then gives herself a little spray before they head out.

At Marie Antoinette's party, the boys get distracted, frustrating Ava. She says that they're normally not like this, but Zari says that she's normally not Captain either. Ava sarcastically says thanks, when Behrad walks up to them. Zari notices something wrong with him and agrees that something is definitely up.

A man walks up to Zari and then suddenly dies, and Ava points out that other people in the room are dying as well. Zari points out that the people would rather die than leave Marie, and Ava realizes that she's stopping the revolution with a party. She tries to get the guys attention, but they've already been affected. She and Zari are the only one's not affected, and are going to have to be the ones to stop Marie. Zari asks if that means she's on the team, and Ava gives a neutral sure. Zari asks what the plan is, and Ava says that they have to get Marie to the Waverider. Zari says that the best way to get her to leave the part would be if there is a better party somewhere else. Ava then decides to go tell Marie, but Zari stops her and knows she's not gonna get anywhere in peasants garb. Zari asks her to trust her, and Ava gives her her hand and is pulled away for a makeover.

Zari and Ava arrive back at the party in full royalty fashion. Zari tells Ava that parties have levels, in order to get past the friends you need to know someone. Ava says that they don't know anyone, and Zari picks out Napoleon as her fake friend. They get into the VIP area, and Zari notices that Marie is away from everyone else. Ava tells Zari to work her magic, but Zari decides to use this as a teaching moment, and pushes Ava towards Marie. Ava is able to get Marie to go along with them, and lead her back to the Waverider.

Back on the Waverider, the now decapitated Marie complains about the "party". Zari agree's just as Ava walks in. Zari tells her that Marie is annoying and Ava places a towel over her head. The boys come in and Ava says that if it wasn't for Zari, they would most likely have died. Behrad asks if now that she's a superhero she'll wear a cowl, but Zari says no. She does need a dress for her event that night, and Ava allows her to use the fabricator. Zari then thanks her and runs off.

Ray runs in and tells everyone that Zari took Marie's perfume. Ava then realizes that the perfume was how Marie controlled everyone and takes Behrad and Nate to go save Zari. She sprays them all with Zari's perfume and runs off to find Zari. They realize that Zari used too much of the perfume and need to get it off of her. While Behrad keeps everyone away, Ava grabs Zari. Zari is happy that they came back for her, and Ava assures her that Legends don't get left behind. She pulls Zari towards the fountain, and Zari asks what she's doing. Ava asks Zari to trust her, and Zari gives in and gives her her hand. The two then jump into the fountain and the perfume washes away.

Ava finds Zari on the bridge staring out into space. She snaps her fingers to get her attention and asks if she's okay. Zari says that she's fine and was just thinking about how Mari is locked up, but she was left off the hook. Ava points out that Marie killed people, all Zari did was screw up. Something everyone does. Zari says that Ava doesn't, but Ava feels that she does all the time. Zari points out how on mission she was when she saved her. Ava thinks that's what she screwed up, but Zari says that she did amazing. She wasn't caring about what others thought, and just did what she had to do. Zari admits that she's been trying to get people to like her for so long that she's forgotten who she really is. She has millions of followers, but no friends. Ava says that she has one, and holds out her hand to Zari. Zari smiles and takes her hand as they start to walk. Zari then tells her that as her friend, Ava is better than wearing pantsuits.

A Head of Her Time

The ship was a minor pairing for the third and fourth seasons, but gained a small following during the fifth season. Zari and Ava's friendship was something that shippers and non-shippers enjoyed seeing.

On AO3, Zava is the tenth most written ship for Zari. 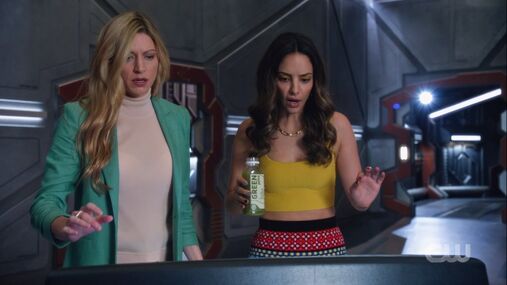 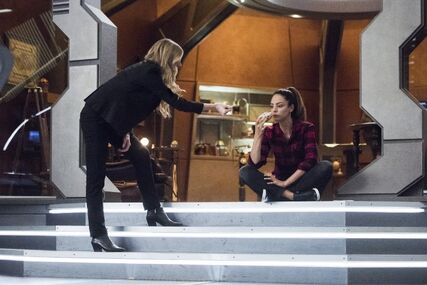