“I'm not moving! This is important to... [...] I said won't let you touch this! It's important to Tanjiro!”
— Zenitsu protecting Tanjiro's box

ZenTan is the slash ship between Tanjiro Kamado and Zenitsu Agatsuma from the Demon Slayer fandom.

At first, Tanjiro is annoyed with Zenitsu as their first encounter involved Zenitsu pestering a girl to marry him when she was clearly against it, forcing Tanjiro to remedy the situation by pulling Zenitsu away from the girl. Zenitsu was in denial that the girl didn't like him and immediately blamed Tanjiro for his failed proposal, causing Tanjiro to look at him in disgust. Despite this, Tanjiro understood that Zenitsu must have been strong enough to pass the Final Selection and that the two can rely on each other during battles against powerful Demons.

Zenitsu won Tanjiro's trust after he defended the box he was carrying Nezuko on, even tho Zenitsu knew from the start there was a demon (but didn't know it was Nezuko back then). Inosuke tried to killed Nezuko but Zenitsu protected the box at all cost, since he acknoledged Tanjiro as the most gentle person he has ever met.

Though Tanjiro can be annoyed by Zenitsu's tantrums and womanizing behavior, he cares for Zenitsu as a close friend and is very patient with him. Zenitsu tends to be the one to inform Tanjiro of the city life and occasionally explain things due to Tanjiro's naivety. He cares for Tanjiro as a close friend and admires his strength and kindness. Zenitsu also attempts to get Tanjiro to acknowledge the prospect of being a future brother-in-law, considering Zenitsu's crush on Nezuko.

Zenitsu depends on Tanjiro quite frequently during intense situations early on, such as when they come into contact with Demons. This was due to Zenitsu's low confidence in himself and a self-deprecating belief that he was a weakling. Zenitsu respects and admires his leadership but also ridicules him out of jealousy whenever Tanjiro mentions his encounters with females without Zenitsu. He also frequently gets frustrated by Tanjiro's bravery and heroism, seeing it as unnecessarily suicidal and getting dragged into dangerous situations because of it. Nevertheless, Zenitsu greatly values their friendship, due to Tanjiro's immense kindness and patience. He's quite possibly Zenitsu's first legitimate friend in his entire life. They cooperate well during battles and have a good friendship.

This ship is very popular inside the Demon Slayer fandom although ZenNezu and TanKana are canon pairings, the fans ship these two boys together from their first encounter and interactions from the manga and above all the anime, where they have more suggestive interactions than in the manga. Fans of this ship usually love their close friendship and how Zenitsu clings to Tanjiro in a cute way. 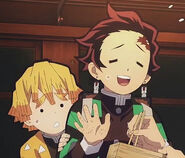 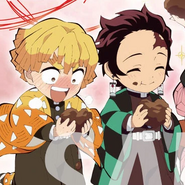 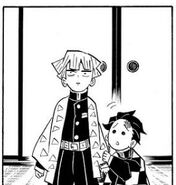