ZhongQing is the het ship between Zhongli and Keqing from the Genshin Impact fandom.

Keqing description says "The Yuheng of the Liyue Qixing. Keqing has much to say about Rex Lapis' unilateral approach to policymaking in Liyue — but in truth, gods admire skeptics such as her quite a lot." and Zhongli is Geo Archon, God of Liyue. They didn't interact in the game timeline, so the ship is based on their profiles and on the development of Keqing's opinion.

Keqing's story tells about one of Rex Lapis' Rite of Descension, where she gave speech about their Geo Archon. She told to all Liyue people that they can't rely on their god forever and he can't develop the country forever. Rex Lapis laughed and give her a smile, which Keqing later thought it was a smile "of acknowledgement and expectation". She thinks that Rex Lapis put in a lot of effort for the sake of Liyue. "Two people who love the same thing need not be on opposing sides". Zhongli's story tells that he wants to leave his duties as a god because world has changed a lot and he cannot provide Liyue forever.

In Keqing's Voiceline about Zhongli, Keqing said "The gentleman from the Wangsheng Funeral Parlor? Clearly, he's an extremely learned individual, and I do have a lot of respect for him. But his mindset is too traditional for me — he thinks in the same tired old terms as Rex Lapis did.. If he were more of an original thinker, I'm sure he'd be a great asset to me in reaching my objectives." This shows Zhongli can be useful to Keqing and she has a lot of respect for him as a person. Keqing also has got figurines of Rex Lapis, and she is very embarrassed and shy when talking about them, showing a faint sign of adoration to Morax.

Keqing thinks that her vision, which she tried to destroy when she got it, was given to her because Rex Lapis thinks she is a great leader, and she is not going to disappoint him. Her opinion of Rex Lapis changed from scepticism to adoration and deep respect after his faked death because she saw how much he did for the prosperity of Liyue. Keqing wants to catch him up, because he is a role model to her.

Zhongli also approves her politics. He said: "She is the most impious of the Qixing — but I actually find the conviction of such people quite endearing" when talking about Keqing, showing that he has an admiration to her. Ganyu in her voicelines mentioned that Rex Lapis called Keqing "the kind of person Liyue needs in this day and age".

Zhongli is imbued with Keqing's ideas. At the end of Liyue's Archon quest he quotes her words "The time of the adepti has long passed. If even the Liyue Qixing don't want to face that truth, then what future is there for Liyue?" and makes an assumption that the only thing Rex Lapis couldn't predict, which was Ningguang's request to Adepti, is Keqing's initiative. That all means that Zhongli is the follower of Yuheng's progressive ideas. Their deep respect to each other, adoration and same striving for the prosperity of Liyue make the potential for strong affection.

“After I took on the management of so many of Liyue's affairs, I had a new-found respect for Rex Lapis and all his hard work over the last millennium. Recently, every time I come up against a difficult problem with no obvious solution, I find myself thinking: What would Rex Lapis do? Maybe he really IS an expert in everything, and I've got more left to learn than I realized...”
— Keqing's Voiceline about Keqing: Self-Reflection

“What do you mean, Geo Archon paraphernalia? ...You're not suggesting my bedroom is full of that stuff, surely? I'm not a child anymore! Although... Okay I did buy a couple of Rex Lapis figurines recently, but — but, they're just to keep me on the straight and narrow. Look, just because I own an idol or two does not mean that I idolize him, okay!?”
— Keqing's Voiceline about Something to Share: Souvenir

“I used to be so naive. I genuinely believed that I was on a par with Rex Lapis... Seems I really overestimated myself. Hmm? Yes... You're right! I have plenty of self-confidence in other areas, so why not in this? ...I can catch up with him — I WILL catch up with him! I just need to keep my chin up, keep trying, and keep learning!”
— Keging's Voiceline about us: Encouragement

“The gentleman from the Wangsheng Funeral Parlor? Clearly, he's an extremely learned individual, and I do have a lot of respect for him. But his mindset is too traditional for me — he thinks in the same tired old terms as Rex Lapis did.. If he were more of an original thinker, I'm sure he'd be a great asset to me in reaching my objectives.”
— Keqing's Voiceline about Zhongli

“Finally, the day came of her now-famous speech at the Rite of Descension. "Rex Lapis has watched over Liyue for a millennium. But what about the next millennium? What about the next ten, or the next hundred millennia? How long are we expecting this status quo to last?" On hearing these words, Rex Lapis burst into hearty laughter. But as for what exactly he was laughing about, only Rex Lapis himself knows.”
— Keqing's Story 1

“During this period, she gained a certain calm, slowly discarding the "opprobrium" she had long held against Rex Lapis. They were both working for the good of Liyue, after all — and two people who love the same thing need not be on opposing sides. She also seemingly came to an understanding concerning the smile Rex Lapis had given her during the Rite of Descension. It was, Keqing now believes, an expression of acknowledgement and expectation.”
— Keqing's Story 4

“Oh, so... Rex Lapis wanted me to have power beyond the average mortal so that I can be a great leader? Huh... I like to think I'd do an admirable job even without his blessing! Yeah, I'll show him... I won't give him any reason to be disappointed with me...”
— Keqing's Voiceline about the Vision: Reflection

“I cannot stand her disrespectful attitude towards Rex Lapis! But he says to me, "Ganyu, this is just the kind of person Liyue needs in this day and age." I guess I'm not smart enough, because I simply do not understand what he means by that. I think I need more life experience to become wise enough to comprehend his words.”
— Ganyu's Voiceline about Keqing: Estrangement

“She is the most impious of the Qixing — but I actually find the conviction of such people quite endearing. The only reason I was able to consider taking a step back from such overarching management of Liyue was because there are people like her. People who speak up when they believe themselves to be right, and then go and do something decisive about it.”
— Zhongli's Voiceline about Keqing

As there is a lot of memes of Keqing being a tsundere to Rex Lapis, or Zhongli. But, this did gained attention from the memes and in Keqing's voiceline of Something to Share: Souvenir. Most of drawings and comics of this pair show Keqing as Rex Lapis fangirl. Fan fiction mostly is concentrated on their respect to each other and development of romantic feelings based on their common ideals. 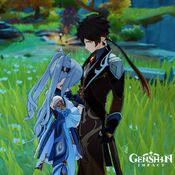 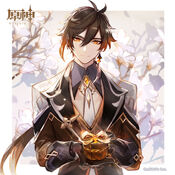 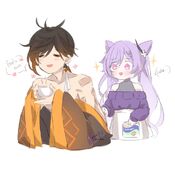 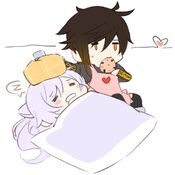 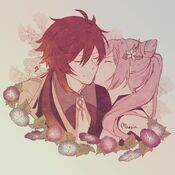