ZhongVen is the slash ship between Zhongli and Venti from the Genshin Impact fandom.

They have not yet been seen interacting. However, it is made clear in both of their stories and voicelines that they are familiar with each other and have several connections with each other. They are the last remaining members of the original Seven Archons, not including the kagemusha Raiden Ei.

They have hid their identities as mere mortals since they are Archons and the two last remaining of the original Sevens. Their "vision" that they wear in their appearances are fake. However, they do behave as actual visions even if it's fake.

In Venti's Story, Where The Wind Doth Not Blow, Zhongli was mentioned. He doesn't play a role in Venti's character stories, but it was said that Venti often tried to play pranks on him.

In Zhongli's Story 5 Venti is mentioned. When Barbatos first came to Liyue, the Anemo Archon tossed a wine bottle at Morax and said "Here's some wine from Mondstadt. Care for a taste?" Morax thought to forsake one's duty to deliver a single bottle of wine was preposterous. Venti continued to visit afterwards to explore Liyue Harbor.

In Zhongli's voice line about Venti, Zhongli is able to tell that Venti has passed through the area because it reeks of wine. Zhongli says that Venti is a drunkard and a disgrace to the arts. However, unlike in the English voice lines, the Chinese voice lines imply that Zhongli spent six hours trying to find Venti, and then beat him up for making the Traveler drunk. Zhongli then came back to brew tea for the Traveler.

In Farewell, the Archaic Lord, Zhongli mentions that a friend of his from Mondstadt, would always bring a few bottles of locally brewed dandelion wine whenever he came to visit Zhongli in Liyue. This heavily implies that the friend of his, is Venti as Venti's favorite drink is Dandelion Wine, and is from Mondstadt.

“Tsk... It reeks of wine. That bard has just been through here, hasn't he ? That drunkard is a disgrace to the arts. Oh... Has he tricked you into getting drunk ? You're slurring a little. Wait a moment, I'll brew a pot of sobering tea. It'll be ready in only six hours, so just wait a moment.”
— Zhongli's Voiceline about Venti

“Have you seen that gentleman around? Huh? He's just a normal man by the name of Zhongli now? That must be quite the change for that old block-head. Come with me to see him, will you? I have a vintage I dug up from Windrise that I can take as a condolence gift. Oh, ahh... did he still seem strong when you saw him? How strong? Am I likely to get blown away?”
— Venti's Voiceline about Zhongli

“As time passed, many of The Seven's titles changed hands, and only two remain of the first Seven: Rex Lapis and the Anemo Archon.

The carefree Barbatos, the Anemo Archon, is the second eldest of The Seven.

When Barbatos first came to Liyue, Rex Lapis believed his fellow archon to have encountered some terrible crisis in pursuit of their duties, thus requiring his aid.

So when Barbatos descended in a gust of wind, the Geo Archon had already prepared himself to receive this neighboring deity and lend what help he may. But as he looked, the Anemo Archon tossed a wine bottle at him.

'Here's some wine from Mondstadt. Care for a taste?'

To forsake one's duty to deliver a single bottle of wine — what a preposterous notion!

Yet the Anemo Archon kept coming to visit, to explore Liyue Harbor, all sorts of strange questions on his lips. The Anemo Archon's questions knew as little limits as the wine in his hands.”

“Even the hardest rocks may be worn down after three thousand years. Nor would the wind ever return again.”
— Zhongli's Character Story 5

“They should be friends, they seem to have a good chat! They seem to be celebrating a birthday. So Hilichurl won't bother them~.”
— Caption from the 2020 Zhongli Chibi Birthday Art on Twitter

“A friend of mine from Mondstadt would always bring a few bottles of locally brewed dandelion wine whenever he came to visit me in Liyue.”
— Zhongli, about Venti, from Chapter I, Act II: Farewell, the Archaic Lord (Archon Quest)

“You should head for Mondstadt's neighboring nation of Liyue. The Geo Archon who reigns there, unlike me, administrates his entire region personally. He only descends once every year to give his divine predictions, which set the direction of Liyue for the rest of that year.”
— Venti, about Zhongli, from Prologue, Act III: Song of the Dragon and Freedom (Archon Quest)

“Your performance was indeed unmatched throughout the land. But the next time you get drunk and pour wine on my head, I shall be quite angry.”
— Zhongli to Venti, from the 'Wings of Shimmering Galaxy' Lore

“As it turned out, Venti had once practiced the art of forgery in order to play pranks on the Geo Archon, but would never deceive the god of wealth and transactions. Even so, his adeptness would come into play after several hundred years.

What a happy coincidence.”
— 'Where the Wind Doth Not Blow', from Venti's Lore

“Tubby explained its presence to you thusly: that Madame Ping had arranged for her to prepare this particular villa after hearing that a certain bard had visited another adeptus's abode recently. Seeing as how you are quite familiar with this fellow, you never know when you might need just such a place.”
— Mondstadt Mansion: Windward Manor Description

“According to Tubby, a certain adepti with black hair and golden eyes wanted to temporarily change the melody echoing in the Realm Within to match the aesthetic of the tea on the table when he was having a small gathering with his friends in the Realm Within.”
— Euphonium Unbound: Winding Description

“ Some adepti would record the melodies circulating around Liyue and enjoy them quietly in the Realm Within. Some friendly guests would bring music from neighboring countries so that the adepti could savor the songs of the people when they lived in seclusion.”
— Euphonium Unbound: Soaring Description

As both of them were the 1st and 2nd archons, ZhongVen then became a semi-popular ship after Zhongli was found to be Morax. ZhongVen mostly portraits a love-hate relationship in most fan arts and comic dubs, or usually, they are sometimes portrayed as an old married couple. There are 900+ works with the pair of these two in AO3. The ship is more popular in the Chinese fandom. It’s rival ships are ChiLi and XiaoVen.

Others have also noticed that Xiao looks very similar to the two. His design shows him having dark hair with green and tuquoise streaks, amber-orange eyes, and an Anemo vision. This has caused the Genshin Impact fandom to jokingly state that Xiao is Venti and Zhongli's "son." 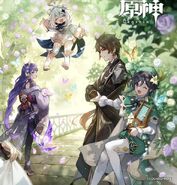