Zhongther is the slash ship between Zhongli and Aether from the Genshin Impact fandom.

In the 1.5 trailer, Zhongli and Aether was seen at the end of the trailer.[1]

Aether first meets Zhongli at Liuli Pavilion in Liyue's Chapter in Act 2. Zhongli asks Aether to help him for the Rite of Parting, Aether and Zhongli went to get a Notilucous Jade, buy Silk Flowers and get the perfume. Aether went to the Statue of the Seven where Zhongli said so. Zhongli thanked Aether and tells him to offer the Statue of the Seven.

Zhongli now tells Aether to help me borrow the Cleansing Bell, after Aether gave Zhongli the Cleansing Bell, the both of them went off to buy kites. Aether and Zhongli now went to Bubu Pharmacy to purchase the Everlasting Incense. After finishing all of those stuffs, Zhongli treats Aether a meal after he helped him so the both of them went to Third-Round Knockout, Aether sat beside Zhongli.

The both of them listened to the story, after the story. Ganyu appeared inviting Aether to the Jade Chamber, after Ganyu left, Zhongli tells Aether to meet him again at Dihua Marsh.

In Zhongli's Story Quest, Aether then meets Zhongli at the Pearl Gallery. Wanyan asks Zhongli if Aether and Paimon are his friends, Zhongli says yes and tells that both Aether and Paimon are quite a knowledgeable and talented pair, also and a pleasure to be around. When Kliment invited Zhongli with Wanyan, Zhongli asked if he could invite Aether as well, while Kliment disagreed on this, Zhongli tells him that Aether has a treasure-finding talent surpassed by no-one, it will surely be of great help for them.

When Kliment asks him what talent, Zhongli says that when Aether espies a treasure chest, he will absolutely find a way to open it. When they went to Guyun Stone Forest, Zhongli says that he will go with Aether. So Aether used his elemental sight to search relics around. They then came across Hydro Mimic monsters so Aether defeated them. They both found a mysterious stone tablet only so they went back to Wanyan and Kliment just to see them arguing. All of them now went to Sal Terrae after their argue. They went to the second contraption, Aether followed Zhongli's instructions and lighted the monuments up. They then went to site of the broken seal and went inside. You could also get to try out Zhongli when you actually go inside of the Domain. After Aether and Zhongli went out of the broken seal, the both of them went to Guyun Stone Forest again. A cutscene starts and Aether was giving Zhongli the Salt Chalice and the Salt Ruler and Zhongli threw them to the ocean.

Aether meets Zhongli again at Third-Round Knockout, Zhongli thought Aether was there for a few tales. Paimon denied it as they have a commission to do so Aether had to ask Zhongli since he understands geology and ore. Zhongli agreed upon saying that it will be his pleasure to accompany him.

On December 31st 2020, Zhongli gives Aether his specialty dish, which happens to be a Slow-Cooked Bamboo Shoot Soup. Along with the soup he also gives him the Philosophies of Gold.

“This is the final day of the year. Thinking back upon the years past at this time never fails to make me sigh. Mortal lives are like fish swimming amidst the rapids, or like vegetation growing beneath boulders. They are weak yet strong, transient yet timeless... truly inscrutable. This year has been one of many more changes than usual. Of these variables, meeting you was the most memorable. How will someone as unique as yourself spend days of birth? I am well-apprised of the more common practices, but I am curious as to your method of celebration. I am still getting used to a simple life such as this. It is a shame, but idle days do not seem to pass more easily than hectic ones. Would you happen to have a day free? I would like to take a stroll. With your companionship, perhaps even familiar sights may yet appear new once more.”

Zhongther is a semi-popular ship in the fandom, its rival ships are Xiaother and ChiLi. But there is a poly ship between the two and Childe, called ChiLither. Zhongther has about 240+ fanfictions on Archive of Our Own. 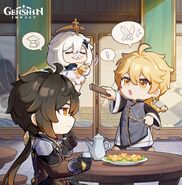 ChiLither refers to the two and Tartaglia.