Zoénette is the femslash ship between Zoé Lee and Marinette Dupain-Cheng from the Miraculous Ladybug fandom.

Zoé meets Marinette in the Tom & Sabine Boulangerie Patisserie bakery, Marinette bumped into her, causing them to fall down. They began talking, and tell each other there names before exchanging phone numbers. Before she leaves Marinette gives her goodies from the bakery. They than meet again at school, Zoé is forced to act rude to Marinette because her powerful sister Chloe does not like her. But Marinette seems to know it isn't like Zoé, they text each other but Chloe finds out, causing Zoé to come up with an excuse.

When Zoé is akumatized into Sole Crusher, she grabs Marinette in her hand. Though it is currently unknown on what Marinette said to her, it seemed to make Zoé sad. Zoé then trips over Chat noir staff, letting Marinette escape and transform into ladybug. After being de-akumatized, Ladybug gives her a charm that protects her from akumatizations. After that, she goes to Luka and Juleka's ship, there Marinette and her chat and than she introduces Zoé to kitty section. Zoé and Marinette than eat macarons together happily.

Now that Zoé is part of Marinette's circle of friends, it allows her to be part of the short film that their shared friends plan to make. With Zoé as one of its main characters, while Marinette makes their costumes. As Marinette watches Zoé rehearse a scene with Myléne in the school's art room, Chloé walks in and demands to be in the film or she'll send Zoé back to New York. Not wanting to lose her friend, Marinette stands up on Zoé's behalf. Chloé's demands and threats anger Marinette while Zoé stays clam and offers to have an off screen role to please her half sister. Marinette understood that Zoé gave into Chloé's threats on her and their friends' behalf, but her anger has Marinette coming up with a way to give Zoé gave her original role and do the film as they all originally wanted behind Chloé's back.

The fandom began shipping them when teasers of Queen Banana and Sole Crusher were released of Marinette and Zoé hanging out. Their happy interactions and cute friendship seemed like a healthy and great ship, but the ship became even stronger when Sole Crusher came out. People pointed out how Zoé seemed to blush when exchanging phone numbers with Marinette, or how their actions reminded them of some Adrienette moments. Zoé's English voice actor is also supportive of the ship and personally thinks that Zoé has a crush on Marinette.

“I think Zoé may have a bit of a crush.”
— Deneen Melody's addressing the question of what she thinks of Zoénette

The ship is still rather small, however the community that ships it grows everyday. So far, the ship has 30+ works on AO3, and many shippers reside on TikTok. 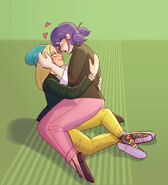 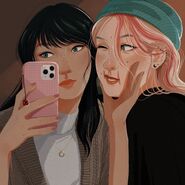 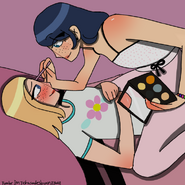 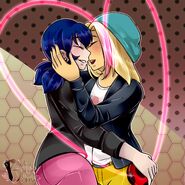 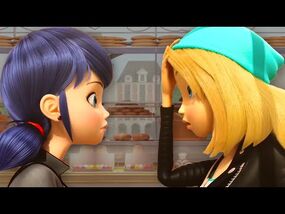